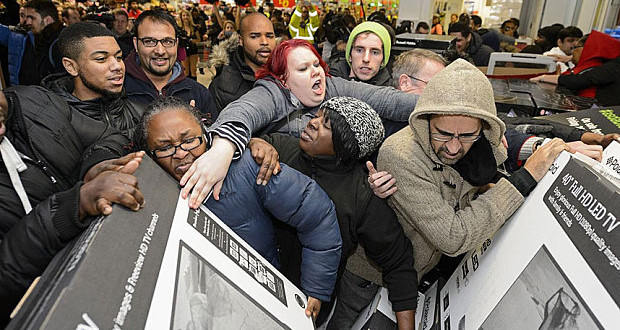 It’s that time of year when we all turn into gibbering idiots and experts take it upon themselves to advise us on the blindingly obvious. In the event of a thunderstorm, avoid standing in an open field waving a golf club at the sky while wearing a tinfoil hat.

The annual plummeting of the national IQ is exacerbated by Black Friday, a day upon which pornographic greed and an overwhelming fear of missing out come together and cause people to spend money they don’t have on things they don’t need.

Here’s how one news story started the week. “With Black Friday and festive shopping mayhem fast approaching, experts have urged consumers to stay alert and safe.” It’s not every journalist who can combine a harmless American tradition with Jesus’s birthday and still manage to strike terror into our hearts.

It’s my opinion that mayhem is best experienced suddenly and without warning. You really don’t want to see it coming. You want to be yawning and scratching your crotch when it heads your way. Be unprepared. That’s my motto.

One of the experts trained in the art of staying alert and safe urged shoppers to be vigilant at malls and shopping centres. I remember a time when it was the streets that weren’t safe. A time when you would seek refuge in malls to avoid getting hit by crossfire, recruited into a biker gang or offered stolen goods you couldn’t afford.

Now, the streets are full of unemployed humanities graduates whose accusing stares fill us with guilt, damn their selfish hollow eyes, but they are mostly harmless. The real danger lurks where the ravening beasts of capitalism have made their loathsome lairs. If it’s sanctuary you’re after, you are safer in a crack house than a mall at this time of year.

The expert urges us to “be aware of the general spike in follow-home incidents”. If I ever start a rebel army – it’s on my bucket list – I shall demand to be called General Spike. Are you listening, Julius? The name is taken. You can have General Dealer, unless my rebel army rebels against me and I start a cannabis farm, in which case it’s mine.

One of the main reasons I go to a mall is in the hope that someone will follow me home. Don’t judge me. I live alone. I’m not the only one who does this. Look around the next time you’re at a mall. Almost everyone who is on their own is hoping for a follow-home incident. Not necessarily by four armed men in a BMW with tinted windows and no licence plates, admittedly. But nobody shops solo with the singular intention of buying things. It’s a deeply unnatural act. How would you even decide what to get without having a second person to consult? After one of my many break-ups, I made the rookie mistake of going to a flea market on my own. I was never the same after that.

The expert says criminals are in the malls watching what you buy. The trick is to have a decoy trolley filled with nappies and bottles of Purity. Not even burglars want to break into a house infested with the freshly born. Your real trolley, full of expensive gear, will have to be pushed by a decoy person. Maybe a friend or relative you don’t particularly like. Get them to take it to their house. You can pick it up the following day, if they’re still alive.

The expert advises that if you think you’re being followed, “drive immediately to a police station”. This is where it gets tricky. What if you are drunk or high? I can’t imagine shopping any other way. The last thing you want is to reel into the charge office babbling about imaginary bandits on your tail. “They were right there, ossifer. I swear.” Brazen it out. Demand a police escort. Then, when you get home, threaten to report them for abusing state resources unless they give you money.

Another piece of advice is to “carry as little as possible in your handbag or pockets”. Has this expert even met a woman? Can you imagine the carnage if husbands had to insist on wives emptying their pockets and handbags before going shopping?

Besides, do we still have pickpockets and bag-snatchers? Bit Dickensian. I suppose you could put scorpions in your pockets and a small improvised explosive device in your bag capable of being detonated remotely. Also useful if your bloke goes into your bag without permission. Then again, if he loses his hands, your workload in the bedroom doubles. Might not be worth it.

Another expert, valued for his razor-sharp acumen, warned against over-spending. Thanks, mate. If it wasn’t for you, I’d be in a homeless shelter. I have no self-control whatsoever. I can’t tell the difference between income and expenditure any more than I can boil an egg without adult supervision.

He also suggested we save money by eating at home instead of in restaurants. I don’t know, bro. Pravin Gordhan is poisoning a lot of people these days and you never know when he might get the address wrong.

The expert said that instead of maxing out your credit card, “rather save up over time for that big-ticket, luxury item”. I’m not so sure. We don’t have a whole lot of time. The country is flying on one engine. If that flames out, there will only be little-ticket items available. Like bread. And maybe a chop if you’re lucky. I say go big now.

The expert also suggests that you put your wallet in the front pocket of your trousers. I’ve tried that but I find it attracts a fair amount of unwanted attention. I have to stop myself from shouting, “My eyes are up here!” Girl, you’re already holding hands with a dude. Behave yourself.

Apparently people who get year-end bonuses are most at risk of being robbed. It’s a good thing I’m a freelancer, then. I haven’t had a bonus in fifteen years. No wonder I’m still alive. What extraordinary luck.

12 thoughts on “A survival guide to Black Friday”