Hunters like Melissa Bachman and Kendall Jones are way braver than I am.

For a start, I wouldn’t dare go on a canned lion hunt because those lions are drugged and you don’t know what a lion on drugs is capable of doing. It might launch itself from a tree, thinking it can fly, and land on your head before you have time to pull the trigger. What if it’s on methylenedioxymethamphetamine and tries to give you a hug? Or lick you to death? Ecstasy has that effect on people, so why not lions?

I’m not interested in hunting anything that can hurt me. Right away that rules out the Big Five. When it comes to the infliction of grievous bodily harm, I shall do the inflicting, thank you very much.

So you can imagine my unbridled joy when I came across John X Safaris in the Eastern Cape and discovered that they cater for gutless wimps like me.

My eye was caught by this line on their blog: “In a world where everything is changing and high standards become the norm, so does the urge of our hunters.” I didn’t understand it, but it sounded deep and esoteric.

It went on. “Hunters from around the world are looking for new opportunities to test their skill and wit against the often forgotten small species of Africa.” Having run out of people to test my wit against, I am delighted to find that small animals are up for the challenge.

The Eastern Cape, according to John X Safaris, gives one the chance to hunt seven of the Tiny Ten. The other three have presumably moved to the Western Cape in the hope of finding a better quality of life.

I could bag myself an Oribi, though I am advised to use “solids” to minimise damage to these “fragile trophies”. Does this mean I have to capture one and feed it solids until it quietly expires from over-eating? Ain’t nobody got time for that. Besides, I am told that Oribi “succumb to predators very easily”. I don’t want to stalk an Oribi for days on end only to find the tawdry slut down on its knees in front of a leopard, one hoof to its forehead, whispering breathlessly, “Take me if you must, you predator, you! Take me now!”

I couldn’t tell from the picture how big an Oribi is because it was lying down. The man who killed it was lying behind it. They seemed to be spooning, which I found romantic. Its long horns threatened an unwanted vasectomy so I looked for something on the Tiny Ten that wasn’t quite so fierce.

The Grey Duiker is apparently “an opportunistic species”. The Julius Malema of the antelope world is usually hunted in the early morning, late afternoon or at night. That’s no good for me. There is a brief window period around midday when I am fully alert, otherwise I am asleep or drunk. 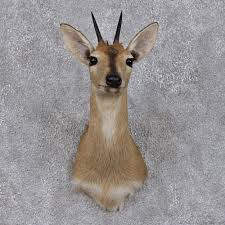 The Cape Grysbuck is a “personal favourite” of whoever runs John X Safaris. And I can see why. It’s small enough to fit on the braai. They are also very shy animals. I guess when Charles Darwin said the meek shall inherit the earth, he wasn’t talking about the Cape Grysbuck. Apparently it will require “many nights of hard hunting”. I have tried that, mainly with women in bars, and there is a serious imbalance between effort and outcome. 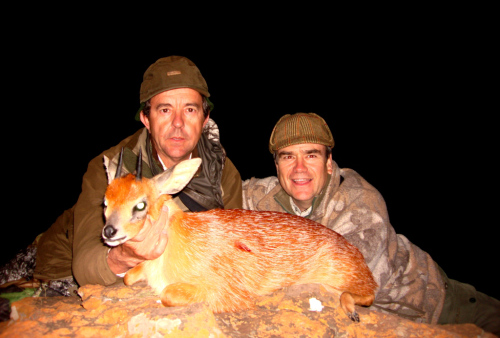 The Blue Duiker is preyed on by caracal and eagles in the coastal forests. Now we’re talking. Any buck that can be carried off by a bird is the kind of buck I want to hunt. Hang on. John X Safaris suggests moving the animals around with Jack Russell terriers. Now I must get a pack of dogs? Jack Russells are roughly the same size as the Blue Duiker. The carnage would be unimaginable and I’d have the SPCA on my case in no time at all. There’s also this: “A 12-gauge shotgun is best suited for these fleet-footed masters of the forest.” Masters of the forest, eh? We’ll see about that. BLAM! BLAM! Blue Duiker, red mist. We are also told it’s known as Puti in Xhosa. I wouldn’t feel comfortable shooting something that can speak Xhosa. Well, apart from the motherfucker who burgled my house last month. 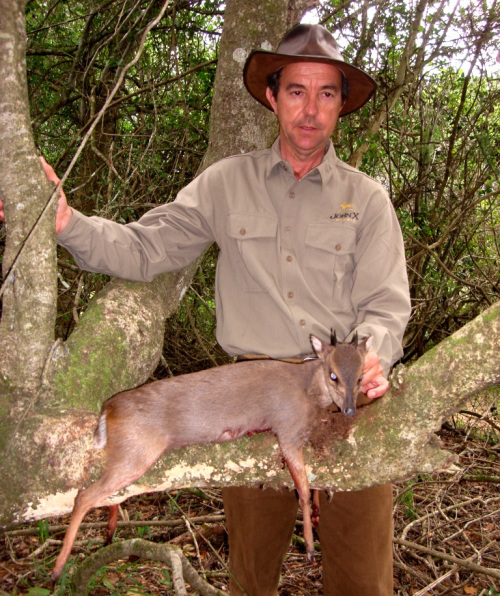 On to the Klipspringer, which means heading into the mountains. This displeases me. I am afraid of heights and clean mountain air makes my head spin. Besides, they are easily spooked. With my stalking skills, Klipspringer in Zambia would hear me coming. 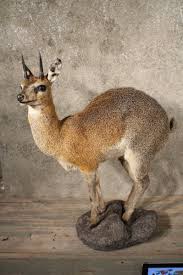 Vaal Rhebuck are out of the question because they live half way to the moon and unless I can shoot one from a helicopter, I’m not interested. 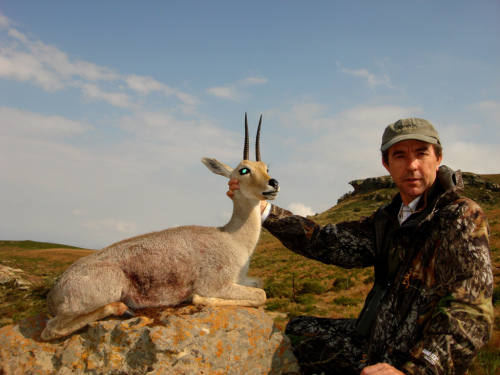 “The Steenbuck is one of the most beautiful of the ten.” Hmm. I like it already. And the hunter in the photo holding up its dead head looks about nine years old. If he can do it, so can I. 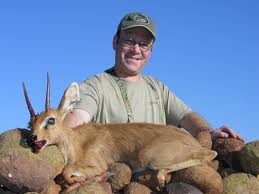 So that’s the Eastern Cape’s seven. For the remaining three in the Tiny Ten, we must visit neighbouring countries. First, to Namibia, to hunt for the dangerous Damara Dik Dik. Well, dangerous in the sense that you could trip over him and do yourself a mischief. Standing 30cm high and weighing in at three kilograms, he is the “ballerina of the bush”. Any animal that thinks it can get on my good side by performing pirouettes and the pas de chat deserves to die. On the other hand, two mouthfuls and he’s gone. If I’m going to have a braai, I can’t expect everyone to bring their own dik dik. Besides, theirs horns are so small that, once his head was on my wall, my jacket would keep slipping off. 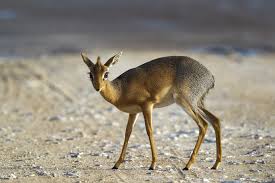 So it’s off to Mozambique for a clear shot at the Red Duiker. “Often spotted as a glowing ember in the forest” – or more likely as a red-hot rifle barrel of a Renamo bandit – we are told to “look for an oversized scrotum hanging between the back legs”. Where? On the buck or on one of the men in the hunting party? It’s not made clear. 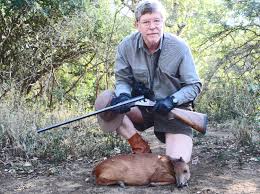 Last on the Tiny Ten list is something called Livingstone’s Suni. The one in the photo looks as if it weighs little more than a hamburger. Suni make weak barking and whistling sounds. “I’m over here,” they seem to be saying. Idiots. 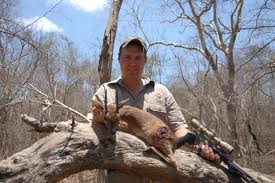 The blog ends with a heartwarming story of Spanish clients, Jose Recio and his sultry wife Filo, who came to the Eastern Cape. Their mission? To hunt fifteen species and kill two of each. Like a homicidal version of Noah. 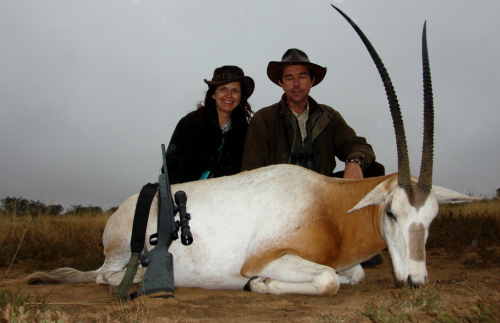 They shot 28 animals in eight days. Jose got not one, but two Vaal Rhebuck. “Two great Vaalies in a morning!” If only.

The final photo of the great white hunters from Spain was of Filo posing with three dead dassies. That’s one brave senorita. A snaggle-toothed dassie will tear your throat out if you don’t give it a ham sandwich. That’s when I got the idea. 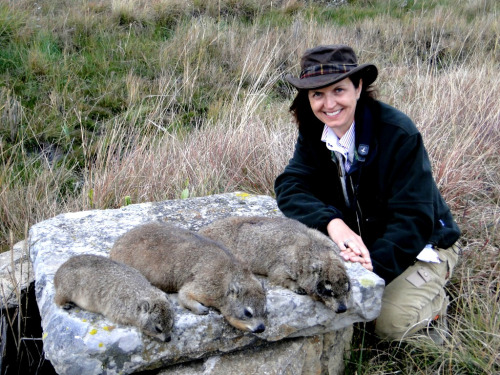