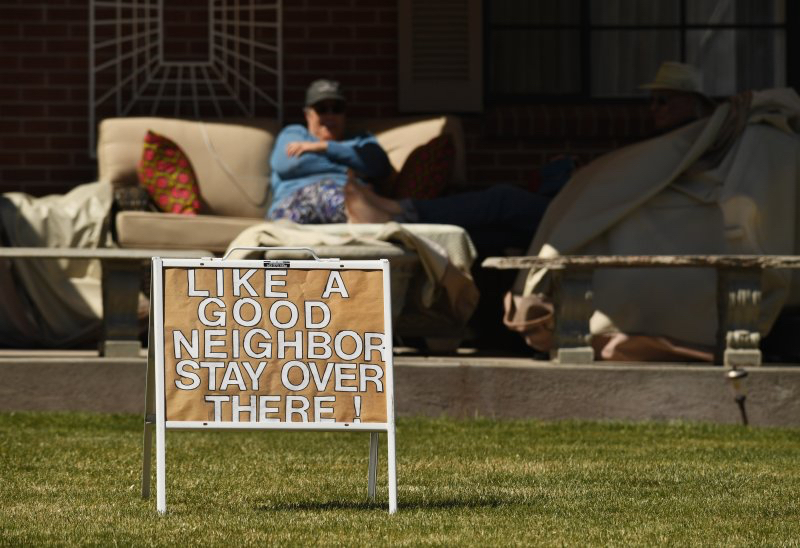 There seems little point in getting out of bed before 11am when you don’t have rabid children leaping on you or a wife standing in the doorway with one feral eyebrow raised, asking if you plan on lying there for the rest of the day.

I am still at the point where I think, “Right, let’s get up, get dressed and …” This is where the plan falls apart. And do what? Stand outside for a few minutes, then go back inside? It’s not enough of an incentive.

Some people have started exercising. I don’t have any equipment apart from a bicycle, which right now is about as useful as a Virgin Active membership. I could lift it above my head but I doubt I’d manage it more than two or three times. The chance of doing myself a mischief far outweighs the potential health benefits.

Suffering from an acute outbreak of Groundhog Day syndrome, I drove to the mall hoping for a high-octane battle of wits with a military unit manning the barricades to protect the population from people like me. Armed with a grocery list – the new dompas – I raced through the empty streets praying that someone would flag me down and interrogate me at gunpoint. No such luck.

The lockdown has revealed some interesting character traits in our fellow citizens. Right now, it’s Lord of the Flies on social media and people are turning on one another faster than ferrets down a Yorkshireman’s trousers.

Yes, indeed. There are a lot of sub-optimal humans out there, and I’m not even talking about the ones ignoring the lockdown. Or the security forces behaving as if they were trained by the Tonton Macoutes.

The suburbs are infested with the kind of people who, had they been living in Berlin in 1938, might have been inclined to whisper, “Psst, Sturmscharführer, there are Jews living in number seven.”

I have never seen white South Africans so demanding, judgemental and united in wanting to “do the right thing”. If only they had been this outspoken during apartheid. Facebook is awash in posts from self-appointed informants – people who were almost certainly prefects at school. In my area, a woman is asking if anyone has a drone to monitor the streets. Ideally, I imagine, a weaponised one capable of swooping in and firing poisoned darts into an errant cyclist’s back.

“Does anyone know this guy?” they shriek, posting blurry pictures of someone in the distance sitting alone on a park bench or paddling a canoe in the middle of a river. As we speak, people are dialling 10111 because they saw a neighbour walking their dog. Where I come from, snitches get stitches.

Nobody dare even mention that they miss being able to go for a jog for fear of being labelled a selfish, entitled mass murderer. The mob has wasted no time shutting down that particular award-winning whine. “There are poor people living in shacks who don’t even have legs and you want to jog what’s wrong with you JUST STAY INSIDE!!?!” they scream, rearing up in their imported Jefferson Chesterfield armchairs, spraying bits of Beluga caviar over the Persian (cat and carpet).

Remember when you were a kid and your mother forced you to eat your broccoli because there are children starving in Ethiopia? Well, Italy has become the new Ethiopia. “Don’t you think people in Rome would also like to walk their dogs but they can’t because they are DEAD thanks to KILLERS LIKE YOU??!!?”

When the national grid finally fails and the water supply runs out, these same manic street preachers will get on their impeccably groomed high horses and say, “Stop moaning, there are millions in this country who live in the dark and have never seen a tap.” And when men in Robocop outfits start smashing down doors and dragging away the artists, poets and intellectuals, they’ll say, “Just let the police do their jobs! Jeez people, the Rwandans had the genocide and they didn’t complain.”

As if we’re not in enough trouble, Moody’s scored the mother of all economic hat-tricks when they became the third ratings agency to kick us in the nuts. We have now swept the boards in the premier junk status league. The government says the downgrade “couldn’t have come at a worse time”. This suggests there might be another time when the government would be able to say, “There has never been a better time for a downgrade.”

Can’t really blame Moody’s, though. The real culprit is in Nkandla, doggie paddling in his fire pool. There are others, of course, both in Dubai and the ANC’s national executive committee, where they continue to successfully maintain social distancing from prosecution.

I find it increasingly difficult to follow the news. The international channels are full of talking heads shouting numbers at me and I can’t watch the local ministerial briefings for more than two or three minutes without wanting to take my own life.

There are so many graphs, models and projections out there that I thought I’d do my own. After a lot of head-scratching and heavy drinking, my calculations showed that 4.2 billion people would be dead by Easter. And that was just in Durban.

Meanwhile, complaints are mounting that police act differently in the way they treat black and white people who violate the lockdown. This is making us look badder than we already are. We need whiteys who are prepared to go out there and provoke the cops into giving them a light whipping to show there is equality and injustice for all, regardless of colour.

41 thoughts on “Coronavirus: Snitches get stitches”