I was delighted to hear that students at the University of Cape Town were burning paintings last week. I have been wanting to do this ever since my art teacher gave me an F for a heavily stylised depiction of my, well, we needn’t go into details. I deserved at least a B+.

Art is responsible for so many terrible things in this world. World War Two, for instance, was a direct consequence of Hitler being a frustrated artist. “Nobody understands my art! Ich habe genug gehabt! Mutter, wo sind meine Unterhose? I am invading Poland in the morning!”

The paintings were ripped from the unsmiling walls of Fuller Hall, Smuts Hall and Jameson Hall. What’s with all these halls? Halls must fall. I admit to never having been inside UCT. I walked in the grounds once late at night, thinking I was in Kirstenbosch Gardens, and haven’t been back since.

At least nobody was burning books. They often don’t catch alight properly, especially the thick ones, and there is nothing worse than a half-burnt book. Now, if you want to talk about oil paintings, those babies really go up. Rookies sometimes try to burn watercolours. Shame. They have so much to learn.

Quite frankly, I am in favour of all art being destroyed. This should preferably be done by the artist the moment he or she has finished creating it. This would save us from getting petrol on our hands and … no, wait. If the artist destroys his own work, that becomes a statement of its own. And statements are art. Well, not the statements issued by the ANC Youth League, obviously. Gibberish can never be art, unless you are a gibber, in which case you should worry more about improving your standing in a society where gibbers are taken less than seriously.

I went to Paris in my early twenties and wandered into the Louvre hoping to buy some cigarettes and a beer. From the outside it looked like an old hotel. Eventually the French had to put up a giant glass pyramid in front to indicate that this was an art gallery and not some sort of maison de mauvaise réputation for impoverished tourists.

Anyway, I ended up standing in a queue for what felt like hours. Knowing how much the French love their wine and fags, it didn’t surprise me in the slightest. What did surprise me was to get to the front and instead of finding a bisexual maître d’hôtel waiting to take my order, I was confronted by a smirking tart called Mona. She was of no use to me or anyone else. Who cares that she was painted by Leonardo di Caprio three thousand years ago? They’re all dead. Most of my morning had been squandered and I was still no closer to a beer or a cigarette. Of course I was angry. Anyone would have been. Well, maybe not the idiots who wasted half their day queueing up to look at a stupid picture of some French chick not even wearing makeup or showing her boobies. No wonder they lost the war.

That’s why I think it’s a good thing the students are burning paintings at UCT. Art doesn’t make you drunk or high. I can’t see the point of it. Statues are the worst. They actually take up space where real people could be standing.

After Paris I went to Florence. I was hitchhiking and didn’t care where I was going. If someone picked me up, I’d go wherever they were going. Some Italian pervert picked me up in a Jeep and said he was going to see Florence. I asked if she had a sister but he pretended not to know what I was talking about. That’s the Italians for you. The city itself was rubbish. Too old, for a start. And you could barely walk for fountains and statues.

There was this one dude called David carved out of some kind of rock by Michael-someone-or-other. He had his willy out right there in the open. David, not Michael. I reckon Michael is probably dead by now. Or living in Benidorm. Same thing.

People say you shouldn’t burn pictures of dead white people because they represent history. I say that’s exactly why you should burn them. History is more evil than Creationism and madder than Scientology. It shouldn’t be taught in our schools. Having to learn history is like having to talk about yesterday the whole time. I don’t care what happened yesterday, and I’m not just saying that because I can’t remember what happened. Terrible things took place in history and the whole filthy business is best forgotten. We should start every day as if we’re seeing and hearing everything for the very first time, like Alzheimer’s patients do.

Lying in the bonfire of last week’s vanities was a bronze plaque of Jan Smuts. He was either a hero or a traitor, depending on who you talk to. I have no intention of ever talking to anyone who knows anything about Jan Smuts. I do, however, think his plaque should have been melted down and beaten into tiny swords and distributed among the protestors. They could then symbolically stab university management without inflicting anything more serious than a scratch. Guns could also be redesigned to fire foam bullets, like NERF guns, causing little more than a light bruise. I think I just solved the problem of violent crime and it seems likely that if I pursue this, I will be in line for a Nobel Peace Prize. Then again, FW de Klerk got one so maybe I won’t.

The good news is that an online site called Joy Digital is calling on Christians to “pray for our nation, pray for our students and future leaders, and pray for the protestors”. To be honest, I prefer religions that don’t simply pray for absolutely everyone. I like the ones that say, “Don’t pray for that lot, because they’re utter bastards.”

They also said, “UCT has coined the name ‘Sodom on the Hill’ as it is filled with sin and debauchery, and many sins of the fathers have been passed down.” UCT coined the name? It seems unlikely. In a burst of defiance that would’ve made Jesus proud, they said, “We cannot turn our backs on UCT and return to our Christian bubbles. We need to be informed and involved.” Is this a threat? I can’t tell. To be on the safe side, it’s probably best you all go back to your bubbles.

The students also erected a tin shanty with en suite portaloo at the bottom of the Jameson Steps, which are well on their way to resembling the Eastern European Steppes. The point they were making was that white students were getting preferential treatment when it came to accommodation.

Vice-chancellor Max Price, going greyer by the minute, told reporters there are 6 800 beds in the universities residences. “Over 75% are currently occupied by black students.” I’d be interested to know what percentage make it out of the beds and into lectures on any given day.

Price needs to toughen up. He needs to come steaming into his parking bay in a jet black Ford Mustang with 375 horses under the hood and a blood-red boot-mounted spoiler. The first thing the protestors see when he opens the heavy door and slowly steps out is a pair of steel-capped crocodile skin boots. His sealskin pants are tight – not gay tight, but tight so he can kick people in the face. He is bare-chested. In one studded gloved hand is a briefcase. In the other, a World War Two flamethrower left to him by his grandfather, whose portrait is now just a pile of ashes blowing across the M3. Mad Max – The Final Chapter.

A word for those Rhodes Must Fall oiks. In the last five years, 95 000 whites have left South Africa. That’s an average of 50 a day. I know it’s not happening fast enough, comrades, but be patient. One day there will be nothing left to burn and nobody left to blame. 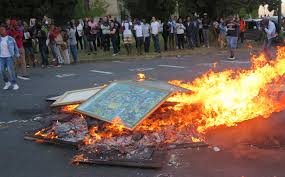 16 thoughts on “Deck the halls with boughs of folly”