I don’t know whether it was a dream or if I read it somewhere – I think I must have read it because I have lived in South Africa all my life and only have nightmares, not dreams – but I recall something about the education department wanting to stop teaching evolution to Grade 7 pupils because the concept was too difficult for them, and their teachers, to grasp.

I couldn’t agree more. Personally, I can think of nothing worse than having to stand in front of a room full of children and try to explain to them that we are descended from apes. Apes! Can you imagine? Children being what they are (dirty-minded, contumacious little ingrates aside), their first question would undoubtedly be, “Why?”

This is where my heart goes out to the teachers. They are trained to dispense knowledge, facilitate learning and nurture critical thinking skills and it is grossly unfair to expect them to be able to explain that we are a species called Homo something-or-other that developed as a result of genetic mutation and natural selection over a period of several millennia.

Were they to even attempt it, the reaction would be predictable. One of the children, and there is always one, will shout: “Jeffrey’s a homo!” There will be mass hysteria and the curly-haired, sensitive kid sitting in front will be pelted with used condoms and crack pipes.

Evolution can be a very disruptive subject to teach. It is highly suggestive and riddled with innuendo. How mortifying, then, for a professional pedagogue to have to tell her pupils that their ancestors slept with apes. Exposure to such filth can cause permanent damage to an impressionable young mind.

Apart from being a pack of pornographic lies, evolution is way too complicated for the human mind to comprehend. It would be far simpler for the teachers to explain that God, who needs no explanation, made Adam and Eve six thousand years ago. If any troublemakers in the class are not satisfied with this perfectly adequate explanation of our origins, all the teacher need do is draw a basic diagram showing how God made Adam from dust and then made Eve from one of Adam’s ribs. No further elucidation is needed.

Teachers should, however, warn their pupils not to try this at home. If I know boys, many of them will want to use their ribs to make girls in the privacy of their own bedrooms. At that age, it’s a lot easier and probably less painful than befriending a ready-made one.

Having said this, I should point out that I am not opposed to the idea of exposing children to different points of view – as long as they have nothing to do with the discredited and impossibly baffling theory of evolution.

I am a big fan of creationism. However, there’s a problem in that it only takes three or four minutes to teach, sometimes quicker if the teacher disallows questions. That leaves a lot of time to fill the lesson – hence my offering of an alternative theory to teach the grade sevens.

Mine is similar to the theory of intelligent design except that I believe our designer to be not particularly bright. He only has Himself to blame, really. He would be a lot smarter if He spent more time reading and less time drinking and smoking weed and staring off into space.

In short, we believe an Electric Catfish called Roger created the universe. Not deliberately, of course. He was three sheets to the wind when the accident happened. Whatever it was that he dropped made such a big bang that He was rendered stone deaf, which is why we forgive Him for never answering our prayers.

Even though my church has thousands of members, if not hundreds, it is unlikely that many of you will have heard of us. Catfishists worship clandestinely because there are people out there who wish to harm us. They say there is no evidence to support our beliefs, but the truth of the matter is that, even though we weren’t around when Roger inadvertently created the universe, we have written quite a thick book – The Holy Barbel – which explains everything.

As an act of faith and to silence the skeptics, we are offering one million rand to anyone who can provide scientific proof that Roger the Electric Catfish did not create all creatures great and small, plus a bunch of other stuff like volcanoes and bananas. 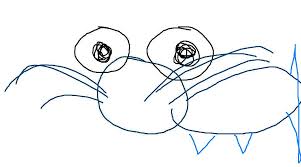 6 thoughts on “God is a counter-evolutionary”