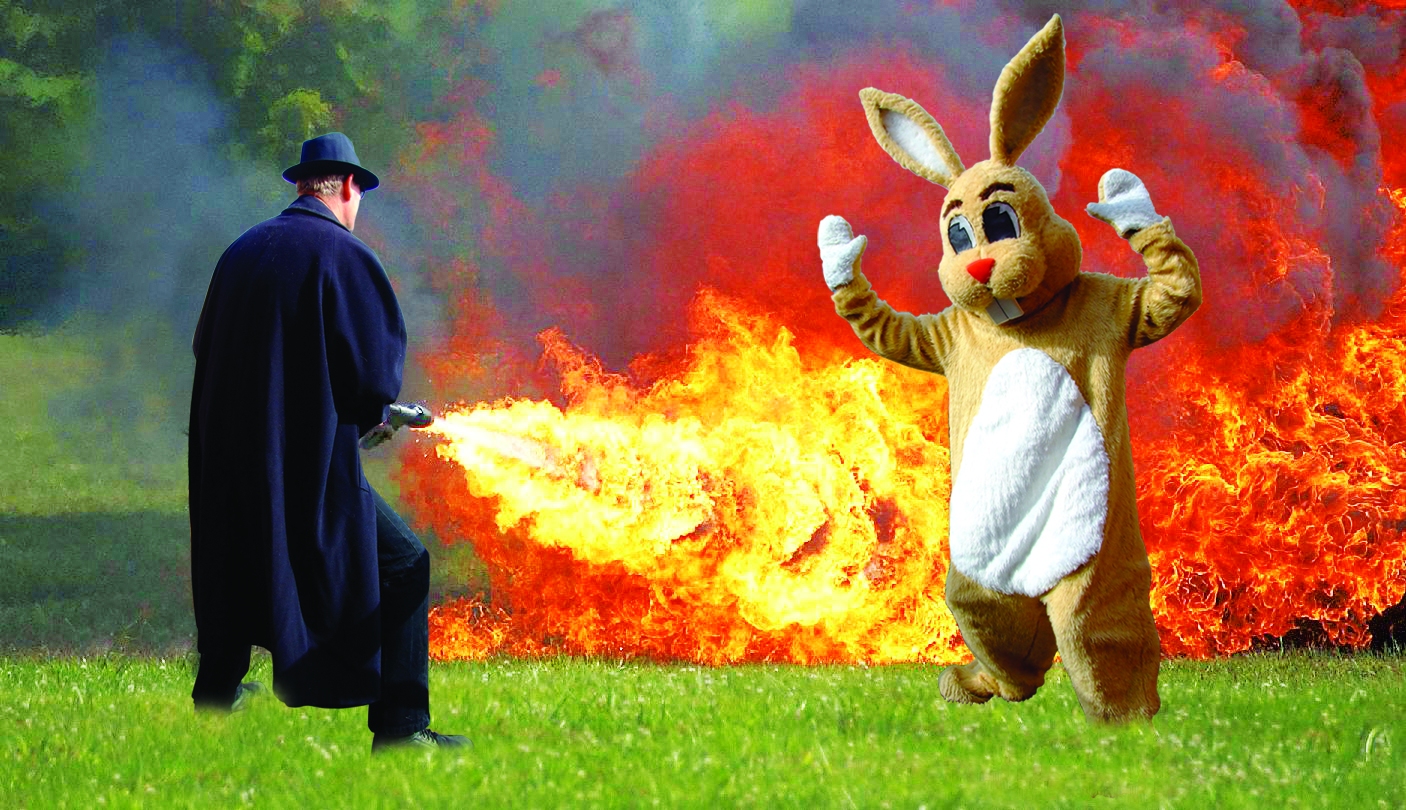 Over the last few weeks the shops have been filling up with lurid gold and silver bunnies of all shapes and sizes. If I didn’t know any better, and I frequently don’t, I might be forgiven for thinking that the Son of God was a rabbit.

Who are we meant to be remembering – Jesus or rabbits?

If we were to do this thing properly, we wouldn’t be sucking on little chocolate Lepus curpaeums this Easter Sunday. We would be sucking on little white chocolate Jesuses moulded onto dark chocolate crosses. I’m pretty sure most Catholics would prefer a bit of that at Mass instead of the same old skinny wafer. Hell, I might even consider becoming a Christian if there was some of the sweet stuff going around.

So what actually happened here? When those busybodies discovered that Jesus’s body had inexplicably disappeared from the cave three days after he was strung up, someone must have said, “We really should make a point of remembering this moment. Any ideas?” After a bit of head scratching, a small fellow with long hair and red eyes put his hand up. “Hey, man,” he said. “Why don’t we, like, pretend that a big invisible rabbit brings chocolate eggs for everyone on this day for the rest of eternity.”

Over the last few hundred years, rabbits, much like Christians, have been responsible for some good things and some not-so-good things. Who can forget the Spanish Inquisition? Or that murderous white rabbit in Terry Gilliam’s quasi-biblical docudrama, The Holy Grail? That vicious brute shocked viewers with his repeated attacks on Knights of the realm, tearing their throats out and forcing the survivors to abandon their quest.

And I still carry the emotional scars of being forced as a child to watch Bugs Bunny. What’s up, Doc? I’ll tell you what’s up, you vocally impaired, dentally challenged freak. My blood, that’s what. If I had my way, I’d blow your stupid floppy-eared head off. I think there is a little bit of Elmer Fudd in all of us.

In fact, a few years ago, a team of assassins was hired to thin out the burgeoning herds of wildly copulating rabbits on Robben Island. They were eating all the fynbos and shagging openly in front of the children. Some of the bigger boy rabbits had even formed gangs and more than one Japanese tourist had reported a mugging after being separated from his group and wandering into the notorious lighthouse district.

Rabbits make good pets but even better stews. And while Christians have been off the menu ever since the Coliseum closed down, rabbits continue to feature on dinner plates around the world.

Easter, like the Robben Island rabbits, is a moveable feast. This is because nobody can agree on a precise date on which Easter should fall. Even the pope relies on the appearance of chocolate chickens and ducks in the Vatican gift shop to tip him off that the day is getting close. I have also heard mention of an ecclesiastical vernal equinox, which sounds like it could be contagious.

“Not so good. Picked up a nasty vernal equinox during Lent.”

In some parts of the world, well, in my house, anyway, Easter Monday is spent experimenting with different methods of lowering the body’s critical blood-sugar levels. Vodka seems to work best as a quick means of fending off diabetes. Periodic visits to the vomitarium are recommended.

Men in the Czech Republic, Hungary and Slovakia also have a jolly old time on Easter Monday. Their tradition involves throwing water at women and spanking them with a special handmade whip. The spankee then gives the spanker a coloured egg or a small amount of money as a token of her gratitude. Shades of Borat.

In some regions, the women get to pour a bucket of cold water on the men later in the day. With all that spanking going on, I dare say they need it.

6 thoughts on “Jesus was a rabbit”