This Penny Sparrow person says the monkey-people have no education. Unless Penny was raised by wolves – a possibility I haven’t entirely discarded – she benefited from a privileged education. She is clearly old enough to have attended a fine Calvinistic school, although it’s often hard to tell the age of estate agents because they drink gin for breakfast and the photos on their business cards are rarely an accurate reflection of current realities. Penny might actually be 12, but more on her mental age in a moment.
In her now-legendary post of four or five sentences, she made at least 21 errors in language. How is this even possible for a person who grew up speaking English? She either spent most of her school career at home sick or was farmed out to the AWB at a very young age.
Of course there is still racism in this country. Only a racist would claim otherwise. The thing is, though, Penny speaks for no one but herself. Quite frankly, I would be astounded to find that she is even capable of coherent speech. The woman is borderline retarded.
There’s no point encouraging her to emigrate, either, because she would be incapable of filling out a departure form. Or even finding her way to the airport.
Pity her. Or stone her. I don’t really care either way. 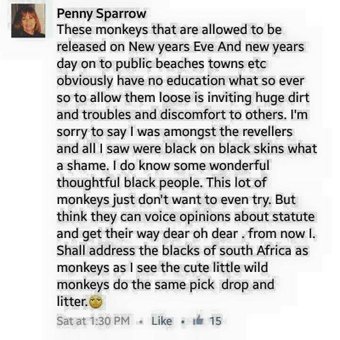 44 thoughts on “Moron of the week”