Greece is the big story at the moment. Here at home we don’t really have big stories any more. Our last one was in 1994.

Instead, we have ill-tempered swarms of loathsome little stories that scurry about yelping and snapping at our synapses, eventually forcing us to self-immolate, overmedicate or emigrate.

I was going to write about how Germany keeps ending up with short, unpleasant chancellors who possess an inexplicable aversion to the Greeks, but I don’t think I will. Let me just say, though, that the Greek king and his government had to go and live in Egypt while Hitler, Mussolini and some Bulgarian lunatic grabbed the best bits of the country for themselves.

The brave men and women of the Greek resistance made the lives of the Axis forces hell, right up until they started fighting among themselves over whether the afternoon nap should be three or five hours long.

The point is, the occupation claimed the lives of nearly half a million Greek people and left the country in ruins, although it was sometimes hard to tell in a country with a proud history of ruins. No, wait. That wasn’t the point. The point is that in 1953, Greece was one of several countries that agreed to write off a huge chunk of Germany’s debt. How about repaying the favour, Angela Merkel?

I said I wasn’t going to write about what’s happening to Greece today and this is one of the few promises to myself I shall keep, even though the consequences of keeping promises can be far more devastating than breaking them. That’s my experience, anyway.

So. I shall write about my holiday to Greece. Everybody loves a holiday story. And if you don’t, there’s probably something wrong with you and you shouldn’t have been allowed out on your own to buy this newspaper.

I got my first real taste of ouzo on the ferry from Italy to Greece. It was brutal. I was drinking with Ralph, a fellow South African who, at some point in the night, went reeling across the deck and disappeared. I dragged his backpack, my backpack and myself into the nearest lifeboat and passed out. The next morning he was nowhere to be seen. Drowned? Possibly. He was certainly going overboard when I last saw him.

Carrying his backpack and mine, I disembarked and went through a ramshackle immigration point, then walked to a nearby village and sat at a table outside a bar, moaning softly to myself. Half an hour went by before I saw a lone figure shambling up the road. He wept when he saw me. He couldn’t remember a thing from the previous night and, his holiday in tatters, had been on his way to the police station.

Greece was awash in beautiful women, many of them travelling alone. I don’t recall speaking to any of them. One night I was in a bar filled with other young people. I had my eye on a woman sitting alone reading. She was gorgeous. I wanted her book. When she left her table for a few minutes to dance, on her own, I quickly went over, grabbed the book and left. I think there might have been something wrong with me.

I’d just come from Spain, where a friend had suggested I go to Greece and pick watermelons. He lied to me. There were no watermelons. Everyone I asked looked at me as if I were mad. I didn’t know the Greek word for watermelon so I had to mime one. Try mime picking a watermelon. It’s dangerously suggestive in a country where men are impressed by the notion that anyone might have a willy so big and heavy that you’d need two hands to lift it. Let alone put it in your mouth. And then spit the pips out.

I spent some time, and the last of my money, drifting around the islands. They were pretty enough. White houses. Blue shutters. Sunsets. Restaurants offering steak, egg and chips. Bars full of plumbers from Putney.

I overheard a table of Poms talking about work opportunities. Crete seemed to be the best bet. Olives, grapes, apples, women – all ripe for the plucking.

Crete is the largest of the Greek islands. It was once the centre of the Minoan empire, the earliest recorded civilisation in Europe. I saw some of their buildings. They were rubbish. Civilisation, my arse.

I needed work. Well, I needed money. In a village I found fellow travellers drinking and playing cards. I got talking to a young couple. He was white and British and his girlfriend was black and Swedish. Later in the evening, she and I made a bit of cash getting people to bet on which one of us was from Africa. It was the only time in my life that my South African passport was worth anything.

Each morning, a dozen of us would gather in the square to wait for the farmers to drive through town looking for casual workers. We’d whip off our shirts, flex our muscles, drop to the ground and do sit-ups and push-ups. I think the farmers were looking not so much for the strongest in the group, but rather the ones who seemed the least hung over. Retsina was cheap and potent and we chucked it down our necks every night by the bucketful. Sunrise would reveal gaping head wounds, suppurating grazes, cuts and even broken arms and legs. It was like 1943 all over again.

One morning, when I looked like a relic from the Minoan era, a farmer waved me over. I limped to his bakkie and got in, along with an American Hell’s Angel called Pete. He was a bear of a man with a wild beard and crazy eyes. He used to ride with the Oakland chapter.

Picking grapes, the farmer kept shouting at Pete to hurry up. We had to fill a certain number of baskets per day or, I don’t know, have our throats cut. Pete, monstrously hung over, was trying to hide beneath the waist-high vines. He eventually lost it.

“Stop breakin’ my balls, old man!” he shouted. But that only seemed to encourage the farmer. I was working near Pete and saw him toss his basket aside and start heading down the hill, his cutting knife in the stabbing position. I went over and talked him out of it.

We were paid so little that we were effectively subsistence labourers. All our wages were spent in the taverna. This went on for weeks. Possibly months. Maybe even years. There was no way of telling. My only hope of ever leaving Crete was to sell something and run for the harbour. I had a change of clothing and a camera. An American girl declined my jeans and other offers but said she’d take my beloved Nikon for the price of a ferry to Athens.

That’s how I arrived at Piraeus docks with five drachma in my pocket and no way of getting back to London. I wasn’t the only one. At least 20 other bandits of the road who’d run out of luck and money had also washed up. I picked my way between the sleeping bags, looking for a piece of wharf I could call my own.

A friendly face caught my eye. He had long hair and lots of beads and other shiny hippy stuff. I spread out near him and nodded a greeting. Later, he came over and asked for money. I laughed, but he wasn’t joking. This is what they did every afternoon. Someone would come around collecting spare change. Then they’d buy as much wine as they could. The wine would be shared among everyone. This was socialism at its best and I was happy to contribute to the greater good. I put my five drachma into his velvet hat.

Two nights later, Gunther and I became closer than I expected. We were drinking and talking when he reached into his bag and hauled out a hunting knife with a 12-inch blade. By this stage I didn’t particularly care whether I lived or died.

‘We become blood brothers, ja?’ It seemed like a great idea. He drew the blade across his wrist and handed the knife to me. I did the same. Blood trickled down my arm and dripped onto my sleeping bag. Gunther raised the knife above his head, said something profound in German, then grabbed my wrist and mashed it against his. This was before anyone knew that someone else’s blood could kill you.

I relied on my shoplifting skills to stay alive. Nothing fancy. Cheese, bread rolls, a tomato here and there. I would occasionally harass passing tourists for a few coins, hoping that one day I’d have enough to return to London. But then the collection hat would come around and getting a bottle of wine seemed a lot more feasible than getting back to England.

After a couple of weeks I went to the South African embassy in Athens, expecting a flurry of behind-the-scenes activity as diplomats worked feverishly around the clock to help rescue one of their citizens.

“So what do you want us to do?” said the gum-chewer behind the bulletproof glass.

“I was thinking you might lend me some money.”

“I understand that. You’re an embassy. My embassy. I’m one of your people.”

“But you work here, right? You’re a representative of the South African government.”

She shrugged. “I think it is better that you try to borrow the money.”

“Borrow money from other people.”

I went back to the embassy every day for a week and I did the same dance with the same horrible woman. Eventually she cracked and arranged for me to get R50. That was the exact amount it cost to get a bus to Calais and a ferry to the other side. It was even stamped in my passport that I owed the South African government fifty stinking bucks.

Three days later I crossed the Channel and arrived in Dover unwashed, penniless and without a return ticket to South Africa. I was staring deportation in the face. By sheer luck, it was a friendly face. She stamped my passport and waved me through.

I found the station, jumped the turnstile and hopped on the next train to London. My exit strategy was simple: run. The plan was complicated by two British Rail cops who grabbed me and took me to their office at St Pancras station. I explained that the only reason I hadn’t bought a ticket was because I had no money. Under the circumstances, it seemed unfair to punish me. They disagreed. They also were less than impressed to discover that my home address was a squat in the East End. They issued me with a summons to appear in court and sent me on my way.

“See you in court,” they said. “Absolutely, officers,” I said. Then caught the tube to Rotherhithe, dodged the Pakistani ticket inspector and bolted for home. 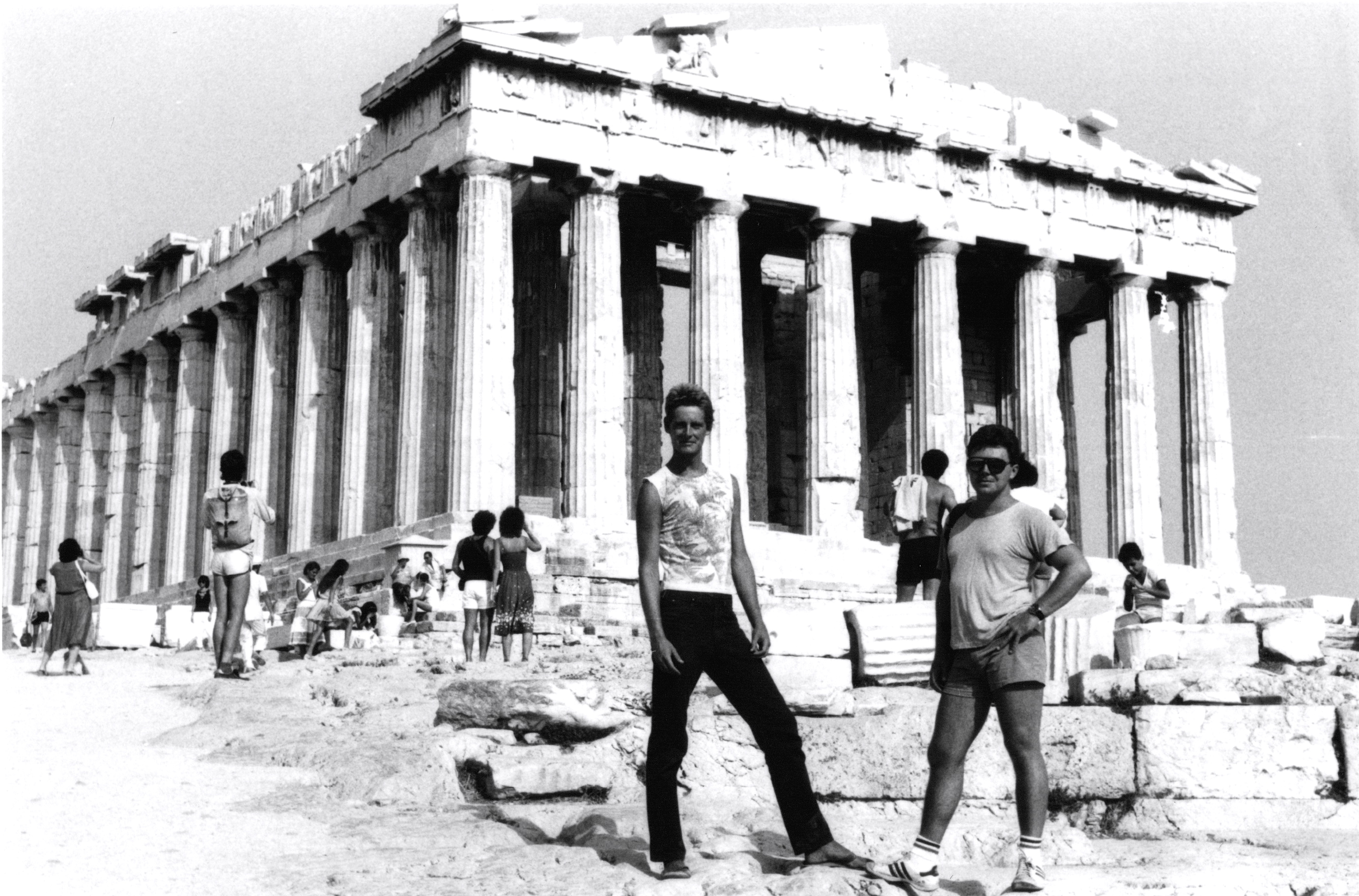 RUINED: The author as a young dog (left) with Ralph who went overboard on ouzo.