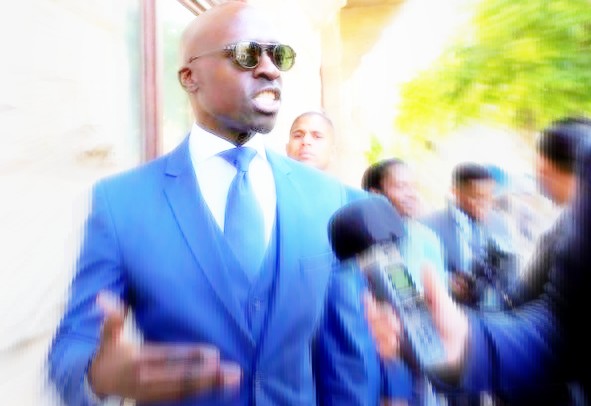 Here’s a letter I wrote to the man of the moment two-and-a-half years ago after Ajay Gupta gave him the home affairs ministry.

Congratulations on your spectacular cinematic debut, even though it was very short. Needless to say, that’s the only thing about your appearance that was short. A week ago, critics were calling for your head and saying you should be bloody well hung. Then your video came out. That shut them up.

I had no intention of viewing your scandalous ménage à un, but a so-called friend mailed it, unbidden, to me. I am pleased to say that I never watched it. Not because I have Tanzanian tendencies when it comes to homoerotic flights of fancy, but because I find the male member an unsightly brute at the best of times. In my opinion, the best of times are when he is sound asleep, curled up like an infant pangolin. Besides which, should I ever desire to see a willy, I only need remove my trousers and look in a mirror. Or, if there is no mirror and the urge takes me, the glass frontage of, say, Mr Price at my local mall. For instance.

Unfortunately, my eyes did fall upon the frozen first image of the video. And even though I refrained from pressing play, it was enough. Having been led to believe that alcohol damages one’s short-term memory, I have been drinking heavily ever since. Not least to forget my inadequacies. My Sir Lancelot is a pale imitation. More pale than imitation, I am sorry to say. Do you have a name for that combat-ready heat-seeking missile? If not, might I suggest Mubi Dick?

Anyway. That is quite enough of that.

Of more pressing concern is your imminent political demise. By demise, I obviously mean promotion. It is a venerable ANC tradition to reward its most shameless and irredeemably exposed cadres with new career opportunities, usually in the diplomatic corps.

You appear to have upset some powerful people, my friend. I am obviously not referring to me or the other 57 million South Africans. We have no power. Well, we do, but we don’t really know what to do with it because we are saturated with either ignorance, apathy or alcohol. Oftentimes, all three. The unholy trinity.

No, I am talking about shadowy organisations like the Oppenheimer Cartel. These upper class thugs trade openly in diamonds while the rest of us go to jail if we so much as attempt to trade the last of our uncut emeralds for beer.

When you were in charge of public enterprises, you handed Eskom, Transnet and Denel to the Gupta Cartel. These Indians, they are not even dangerous men. My advice is that you do not mess with Don Nicky ‘Fireblade’ Oppenheimer. If he wants his own airport, give it to him. Give him whatever he wants. He is white and rich. History has shown that this an unbeatable combination.

Why on earth has Public Protector Busisiwe ‘Zuma Is Innocent’ Mkhwebane turned against you in the aviation matter? This is a woman who was trained to defend her comrades at all costs, and yet she has chosen to run with the fox and hunt with the hounds. Quite frankly, I don’t know if you are the fox or the hound. It’s a British expression. Nobody ever knows what they mean. It’s why we murdered them at Isandlwana.

Apparently a parliamentary portfolio committee has come up with a draft report saying you should be criminally investigated on suspicion of having been captured by the Guptas. This is outrageous. If the Guptas had indeed captured you, surely you would right now be tied up in a fur-lined dungeon in downtown Dubai while Atul the Dominator disciplined you with an ivory-handled camelhair whip. Instead, here you are, wandering about of your own free willy in the finest of suits, conducting government business, shaking hands, kissing babies, issuing denials and, in your evenings, remaking classics like Onan the Barbarian.

Somebody has poisoned our water supply with cynicism because nobody believes a word you say, but I drink beer, not water, so I believe you when you say there is an orchestrated campaign to ruin your career and prevent you from becoming president. To be hounded and condemned by much of the executive, a fair portion of the legislature, every level of the judiciary and virtually every man, woman and child in the country is the very definition of an orchestrated campaign.

I don’t know how they think they can get away with it.

Your response to this campaign of evil was sublime. “I am going to consult my lawyers in terms of how I am going to respond to this.” Even the most hardened of conspirators will tremble at the thought of your imminent consultations.

It is truly tragic when you consider that none of this would be happening if Nkosazana Dlamini-Zuma hadn’t been pipped at the post by Squirrel Ramaphosa. The man is a menace. Where does he think he is? Sweden? This is Africa, for heaven’s sake. A continent where every silver lining has a cloud, every dog its day and every cart its rotten apples. In flagrant contravention of tradition, Squirrel is giving every indication of being one of those aberrant leaders who think that upsetting apple carts is a good idea.

Is it true that you are refusing to resign? Of course it is. I would expect nothing less. To the barricades! No Retreat, No Surrender is not just a movie. It is the story of your life. You are the black Jean-Claude Van Damme of our time. All you need is better lighting. And maybe a plausible script.

You said you are “surrounded by militant comrades” who will defend you. I do hope you are referring to more than just the avocado-shaped Andile Mngxitama and his drunk, shouty friends.

If not, you might want to consider a Plan B. You are, after all, the Minister of Home Affairs. You get to decide who is a South African and who isn’t. Who may stay and who should leave. Do you see what I am saying? All you need do is declare your enemies persona non grata. Get a courier to take a letter over to the Union Buildings first thing in the morning, letting the president know that his citizenship has been revoked. Include an air ticket to Cairo. Economy class, obviously. The man should suffer at least once in his life.

Should you consider my advice sound and good, I hereby register myself as an enemy forthwith and request immediate deportation to a country with warm weather, cheap beer, good surf and plenty of sloths.

5 thoughts on “No safe harbour for Gigaba – a flashback”