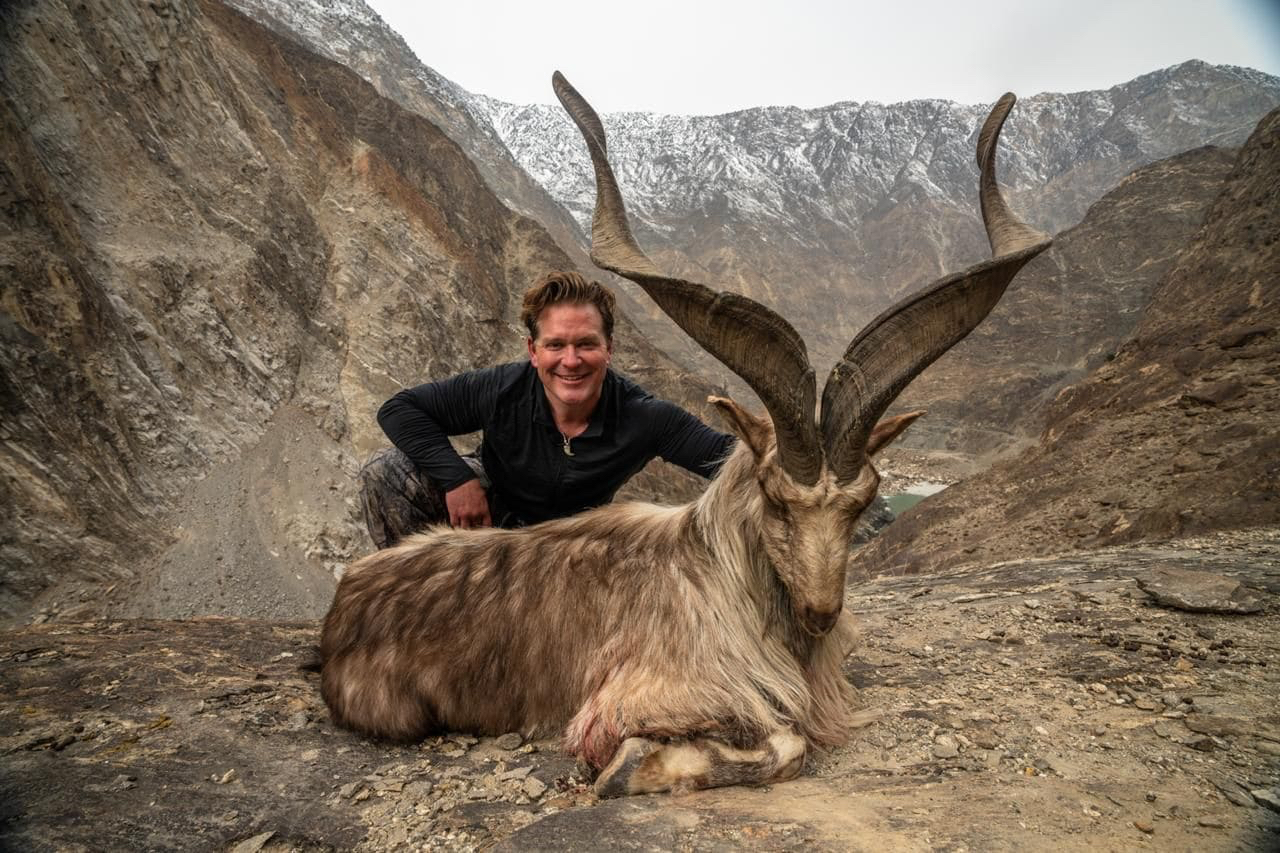 I do apologise. The world is full of inconsequential Bryans and I am sure the last thing a man of your stature would want is to be confused with the multitude of Bryans who lack the courage to shoot a wild mountain goat. I mean no disrespect. There is only one Bryan Kinsel Harlan in this world. Or in Texas, at least. Dallas, certainly.

I saw your video on social media and was blown away. Not in the same way your goat was blown away, obviously. But watching you scrambling through the rocky terrain of Pakistan’s northern Gilgit region with only a dozen or so heavily armed guides as backup, I felt my loins stir on more than one occasion. And when you raised your rifle and shot that goat, well, it was all I could do not to have an incident in my pants. I can’t begin to imagine how aroused you must get watching an animal through your telescopic sights, knowing it only has seconds left to live.

High-fiving the guides after pulling the trigger was a nice gesture. Americans all too often forget to give credit to the locals who help them hunt goats or Islamic insurgents or whatever happens to be on the list of things to kill that day.

I believe you paid a record price of $110 000 dollars to shoot your goat. You must be a very wealthy man. In my country, that kind of money gets you two cabinet ministers and the CEO of one of our smaller parastatals.

Sadly, not everyone is impressed. There are some people who think what you did is barbaric and cruel. I am outraged at their outrage. I can’t believe that the animal huggers at PETA not only condemned the hunt but went so far as to describe goats as “gentle individuals, not trophies”.

I am sure you know what it’s like to have a goat come on you … I beg your pardon. Come at you. They won’t hesitate to batter you mercilessly until you are forced to run away with your pants around your ankles. Or so I have heard.

And who can forget that the devil himself is portrayed as a goat? You are obviously aware that GOAT is an acronym for Greatest of All Time. How dare they usurp the title reserved for Jesus. This godless arrogance will not stand. I wouldn’t be surprised if this hunt wasn’t part of your broader Christian mission to punish Satan. Good for you. I, for one, will sleep more soundly tonight knowing there is one less evil, cloven-hoofed beast out there.

I read that a gang of Pakistanis are also up in arms. Ha! If only. More arms would mean fewer depraved ungulates to lead our children astray. After seeing pictures of you and your dead goat, these cabbage-eating extremists called for a ban on hunting. Sure, this goat is their country’s national animal, but so what? Ours is the springbok and we can’t get their flesh down our throats, their heads on our walls or their skins on our floors quick enough.

Okay, so there are fewer than six thousand Astor markhors left in the world. But still. Goats. Right? To encourage more Americans to trophy hunt, your Fish and Wildlife Service reclassified them as threatened rather than endangered. Damn right, they’re threatened. By real men like you.

I thought it was very decent of you to give the local press an interview. After all, it’s a well-known fact that journalists are closely related to goats as a result of spending time in close proximity to one another on Noah’s ark and neither can be trusted.

A Pakistani newspaper quoted you as saying, “It was an easy and close shot and I am pleased to take this trophy.” This makes it sound like the goat was still woozy from the anaesthetic when you walked up and put a bullet into the back of his head.

You were obviously misquoted and I hope you are taking legal action. I have no doubt that your original quote was more along the lines of, “The battle between this vicious creature and me, a battle between good and evil, was long and brutal and I knew only one of us would get out of there alive.”

No, wait. What am I talking about? I saw the video. Your big boy goat was sitting next to a much younger goat. His wife? His lover? His child? Who knows. More importantly, who cares. Well, I suppose the other goat might still be wondering why her companion suddenly jumped up, thrashed about and then died in a pool of blood. Still, that’s not your problem. It’s not like she can sue you for loss of income.

At the end of your video, you encourage Americans to visit Pakistan. You say Mexico is more dangerous than Pakistan. Bloody Mexicans. Build that wall. I’m with you on this. Texans especially should check out northern Waziristan. The local Taliban guides will be happy to help out. Just watch out for the drones. You should be okay, though. They’re hunting Muslims, not red-blooded patriots like yourself.

MAGA! (May All Goats be Assassinated).

2 thoughts on “On brave Americans and goats of darkness”