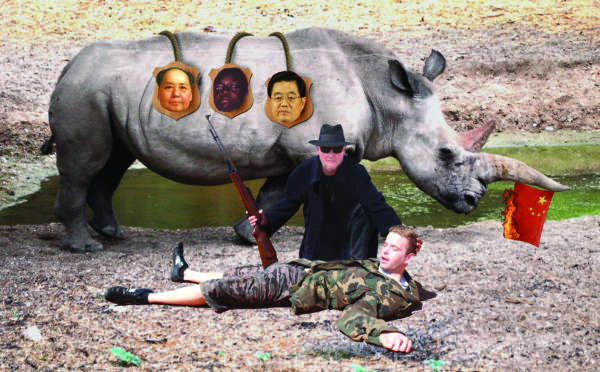 If true, this is, of course, brilliant news. The Oxpeckers’ tweet reminded me that I wrote to this delightful man nearly seven years ago.

An open letter to Hugo Ras 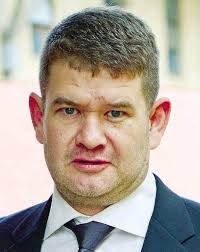 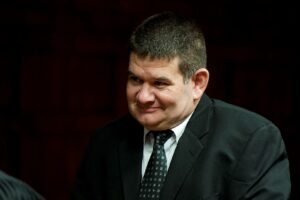 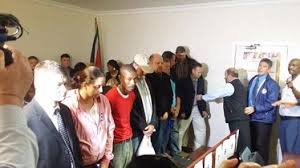 Maybe I should call you Huge Ou because it looks like you could be a big oke. I’ve only seen pictures of your face, though. Speaking of which, did you have a terrible accident or were you born that way? It doesn’t matter. The main thing is that you win your case and carry on ridding our country of these abominable creatures.

When I first heard that ten members of a rhino-poaching syndicate were appearing in court, the first image that came to mind was of nine skinny Mozambicans and a white man in charge. Imagine my surprise when I discovered that only one of your group is black.

Was Mandla Magagula a BEE appointment or did you just need someone to do the heavy lifting? Chopping a horn off a rhino’s face must be devilishly hard work, especially in the humidity of the Kruger Park, and it would make sense to hire someone who knows his way around a panga and doesn’t feel the heat.

I think you guys are doing great work. Rhinos, in my opinion, are heavily overrated. For a start, they’re fat. There’s no excuse for that. By now everyone, rhinos included, must have heard of the Banting diet. Thin rhinos, pronking gracefully through the veld, would be far more of a tourist attraction than these shortsighted, overweight curmudgeons currently blotting our landscape.

Your group allegedly killed 22 rhinos and mutilated two others between 2008 and 2012. I hope you don’t mind me using the word ‘allegedly’. I’m not trying to diminish your accomplishments or cast doubt on the courage needed to come within 800m of a rhino and, without even spilling your beer, bring him down with nothing but a little old high-powered rifle. It’s really just to satisfy the lawyers. You know how touchy they can be.

To get away with it for so long and then suddenly get bust seems to suggest there is a mole in your group. Could it be your wife, Trudi? You can never trust wives. They will insist otherwise, but you can’t. Not really. I doubt it was her, though. You would have needed her at home to do the cooking and the books. Or maybe just cooking the books. Also, someone has to wash all that rhino blood out of your khaki shorts.

You’re probably close to your brother, Anton, so it’s unlikely he was the rat. What about your brother-in-law, Arno Smith? Probably not. Nobody in their right mind would mess with someone who has a face like yours.

Then there’s Ficksburg pilot, Bonnie Steyn. Everyone thinks they can trust pilots until something snaps and they steer the plane into a mountainside or run off with your girlfriend. But you were probably giving him steady work and in these hard times, there are worse jobs than flying around a game park looking for rhinos to kill.

When it comes to the mole, my money is on warrant officer Willie Oosthuizen from the Organised Crime Unit. Apparently, he was your right-hand man. What were you thinking? You must be the only person in the country who still trusts policemen. My bet is that after sentencing, he’ll be driven to the airport and put on a plane.

If it’s not the cop who squealed, my next best bet is lawyer Joseph Wilkinson. He sounds English, so right away you can’t trust him. Then again, next to young blondes, lawyers love nothing more than piles of easy money being thrown their way. Their profession demands the ability to lie with the utmost conviction through their capped teeth, so if he tries to tell you that he never ratted you out, then you know he probably did.

Could Mandla Magagula be the impimpi? I really hope not. It would play right into the hands of those who say darkies will double-cross you as soon as look at you. I’m sure you gave him a job because you believe affirmative action is the best way to correct the imbalances of the past. Well done, Hugo. It’s this kind of thing that will go a long way towards preventing the wholesale slaughter of white people. If you tell the judge you’re providing employment to the previously disadvantaged, you’ll probably be acquitted on the spot. President Zuma might even want to give you some sort of medal.

You guys are also facing other charges, including theft, fraud, malicious damage to property, money laundering, intimidation and illegal possession of arms and ammunition. In prosecutorial terms, this is known as the Oscar Offensive. I’m surprised they haven’t thrown in a charge of littering after you left all those unsightly rhino carcasses out in the open to rot.

The state says the rhinos you butchered were worth around R22-million. In South African terms, this isn’t an awful lot of money. Zuma paid that for a chicken coop and two banana trees. Then again, you did get your hands on dozens more horns from rhinos killed by other people, so they must be worth a bob or two.

I was impressed to discover that you’re made of the same material our president is made from. You’ve had many run-ins with the law in the past, but nothing ever seems to stick. You seem confident of pulling it off again this time. Not only did you not apply for bail last week, but you didn’t even have a lawyer in court. Either you have a brilliant strategy or you really are as stupid as you look, which hardly seems feasible.

Before I forget. All that M99 anaesthetic police found on your farm – do you have any more stashed away somewhere? At three thousand times more powerful than morphine, it sounds like something one could have a bit of fun with of a weekend.

If, by some miracle, you aren’t all acquitted, please consider getting the old group back together when you get out. There probably won’t be any rhinos left by then, but you could make a start on the elephants. They stand around flapping their ears, making trunk calls, and, more often than not, blocking our view at the waterholes.