You know 2016 is going to be a good year when you pick up the morning paper and, splashed across Page 2, is the headline, “Giant luxury development at Sibaya precinct.” One wouldn’t want to buy the paper and see, for instance, a headline like, “Giant man-eating lizard found at Sibaya precinct” or even “Giant low-income housing project at Sibaya precinct.” Precinct. What a peculiar word. It reminds me of old American cop movies. I see a word like that, I don’t think of investing in property. I think of Al Pacino.

And yet, when I think of property developers I also think of Al Pacino. And I’m not talking Scent of a Woman, either. I’m talking Scarface. The Godfather. Devil’s Advocate.

When it comes to the Sibaya precinct, I am the unofficial sheriff. There is no official sheriff. Well, there might be but he keeps a low profile. Just the other day, motorists returning from the city were being shot at by unknown elements lurking in the undergrowth at the Sibaya circle. As far as I’m concerned, that’s one of the risks you take when you sell your soul for a salary. You’d rather live on your knees than die on your feet? Fine. That’s your choice. But don’t complain when … I’ve forgotten my point.

Sibaya Casino and Entertainment World never existed when I was an apprentice juvenile delinquent. It was sugar cane all the way from my home in Durban North right up to Umdloti and beyond. There were no casinos back then because gambling was a sin in the eyes of the Lord. Apartheid was cool, though. He was just that kind of Lord, I guess. Or maybe they were just that kind of government.

I know Umdloti was renamed eMdloti, probably during the Sutcliffe purges, but I don’t see why I should have to fiddle about with upper and lower case keys simply because it’s linguistically correct. Between the Boer War and 1994, the Zulus had plenty of time to complain about the spelling.

Wikipedia tells me Mdloti is the Zulu word for “a species of wild tobacco” that grows around here. I suppose I could get confirmation from a real live Zulu but that would mean waiting until Nomusa gets here on Tuesday and I just don’t have the time. I’ve had some pretty wild tobacco while growing up in Durban, but I’ve never heard anyone call it Mdloti.

Anyway. I know this place. From when I was five years old, my family would bring me here every Sunday for a picnic on the beach. Sometimes they took me home, sometimes they didn’t. I remember rock pools, lots of bush, dolphins, a strong smell of antiseptic and a policeman with rubber gloves.

My point is this. Things must change. Umdloti has more restaurants than it does bottle stores, brothels or crack dealers. This is elitism at its worst. Fortunately this is all about to change.

By December 2018, a multibillion-rand concrete jungle will sprawl like a high-class whore between Sibaya and Umdloti.

Hopefully this development signals the birth of a megalopolis stretching all the way from Umhlanga to Umdloti. There’s a lot of unnecessary coastal bush that can be turned into security complexes and strip malls. Obviously we need to be sensitive to nature, so I suggest we have feeding stations for monkeys, fish eagles and the homeless. We could even save costs by having the fish eagles eat the monkeys and the homeless eat the fish eagles. Look at me, doing the developer’s work for him. That’s the humanitarian in me coming out, that is.

The development was unveiled – like a precious work of art – at Sibaya Casino last week.

An unveiling is not the same as a launch. It’s a taste. An appetiser, if you will. Much like a dealer who hangs around high schools offering girls a snort off his little silver spoon. In this case, it was probably sushi. I don’t know for sure because I wasn’t there. If people would only invite me to their functions we could avoid all this speculation and deal in facts and truth, not that I’m a huge fan of either.

By having their unveiling at a casino, the developers showed a keen sense of irony. For that, I applaud them. If they weren’t aware of the irony, I applaud them nevertheless. Asking people to believe in your dream of converting unsightly bush and monkeys into apartments, offices and shops is a gamble. Luckily for them, we are a nation of gamblers. For instance, we keep gambling on the ANC to improve our lives and we keep losing. But we don’t give up. We stick with them. We also gamble on our marriages working out but they don’t and yet we still keep trying. I’m not necessarily saying we’re retarded. We’re just … I don’t know what the hell we are.

It’s a bit of a gamble for punters because the project is due for completion in two years’ time and by then there might be so many nuclear bombs flying about that the polar ice caps would have melted, pushing the beach up to Pietermaritzburg.

But right now it’s not much of a gamble for the folk who own the land. Tongaat-Hulett is their name. Double-barelled sugar barons. They own at least 23 000 hectares of prime land along the coast and the thing they produce is, according to some, as harmful as crack cocaine. I don’t know about that. I’ve had sugar and I’ve had cocaine and there is a difference. I haven’t tried crack. I should make that one of my New Year’s resolutions.

Tongaat-Hulett’s canefields need water and that’s running out faster than decent weed on the north coast. It’s one of the reasons they’re becoming property developers. People who can afford to live in giant luxury developments don’t need water. Three bottles of Pongracz per person per day and they’re happier than pigs in a poke or poking pigs or whatever.

Charles Thompson is the principal contractor on the project. There’s a picture of him in a white shirt and blue tie with his sunglasses pushed back on his head. He is looking at an artist’s impression of what the Privileged People’s Republic would presumably look like in 2018. There were no images of white people on the beach fighting their way into ski boats ahead of a shouty mob of half-drunk Economic Freedom Fighters.

Charlie said the plan was to develop a “synergy between nature and development”. When property developers talk like this, bunny huggers need to hurry over to the trees and say their final goodbyes. There are those who would claim that synergy between nature and development is impossible since nature has no say in what happens to it. Please. It it our fault that trees aren’t evolved enough to talk? Where I come from, anything that can’t file a lawsuit or carry a weapon is fair game.

Charlie Boy – he describes himself as a young person – is quoted as saying, “We want to create a kind of Melrose Arch place.” Melrose Arch sounds like a sculpture of Desmond Tutu made out of cheese but it’s more like something you’d find on level four of Dante’s Inferno filled with the souls of the damned struggling to reach level three but there are no elevators or stairs and The Little Drummer Boy is playing at full volume on a loop while nine Fox Terriers bark and seven babies cry.

The blurb on the Melrose Arch website says, “Live, work, play or simply love hanging out here and you’ll discover hints of London, Paris, New York and Milan.” This is precisely what Umdloti has been lacking. Some days after surfing there I have wished I could get on a ferris wheel or travel on an underground train from Tasca Pizza to Java Café after being searched by heavily armed men. It’s only 800m, but still. I’d get the cosmopolitan rush that is denied to those of us who have failed to move to the first world. What I wouldn’t give to be in Paris right now. Nothing, quite frankly. I’d give nothing at all.

Charlie said the development would provide investment opportunities for younger people. He also said it would provide opportunities for older people. In other words, it’s perfect for humans. The oldies would be “looking for a place where they could lock up and go”. Poor bastards. All this time they’ve been unable to lock up and go. Don’t their doors have locks? Seems unlikely in this country. Maybe they do have locks but they just can’t bring themselves to go. Perhaps they lock up and stand outside in the garden for a bit, looking wistfully at their house before going back inside.

“I wish one day we could just lock up and go, Basil.”

“I hear there’s talk of a new place up the coast where people will be able to do that sort of thing all the time.”

“Can we move there, Basil? Please!”

“I don’t know, Maude. Apparently there’s a synergy whatnot going on. Doesn’t sound safe to me.”

Meanwhile, I went to Umdloti this week to get a couple of photos before the lame village vibe gets improved by lashings of concrete and road rage, but got caught up at the Bush Tavern and all the waiters I spoke to seemed very excited about the new development. They would be. They don’t live there. 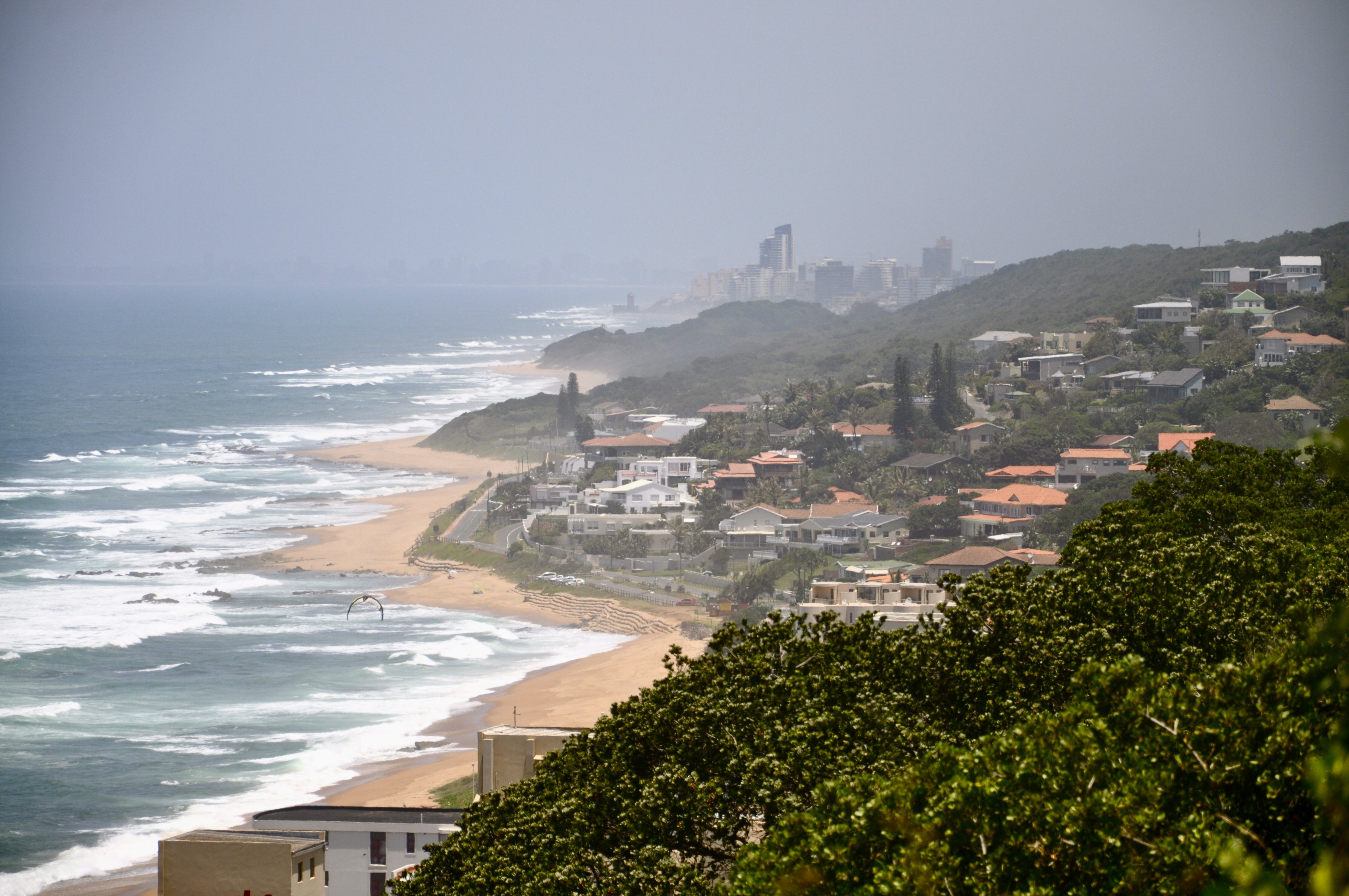 7 thoughts on “Synergy of the sugar daddies”