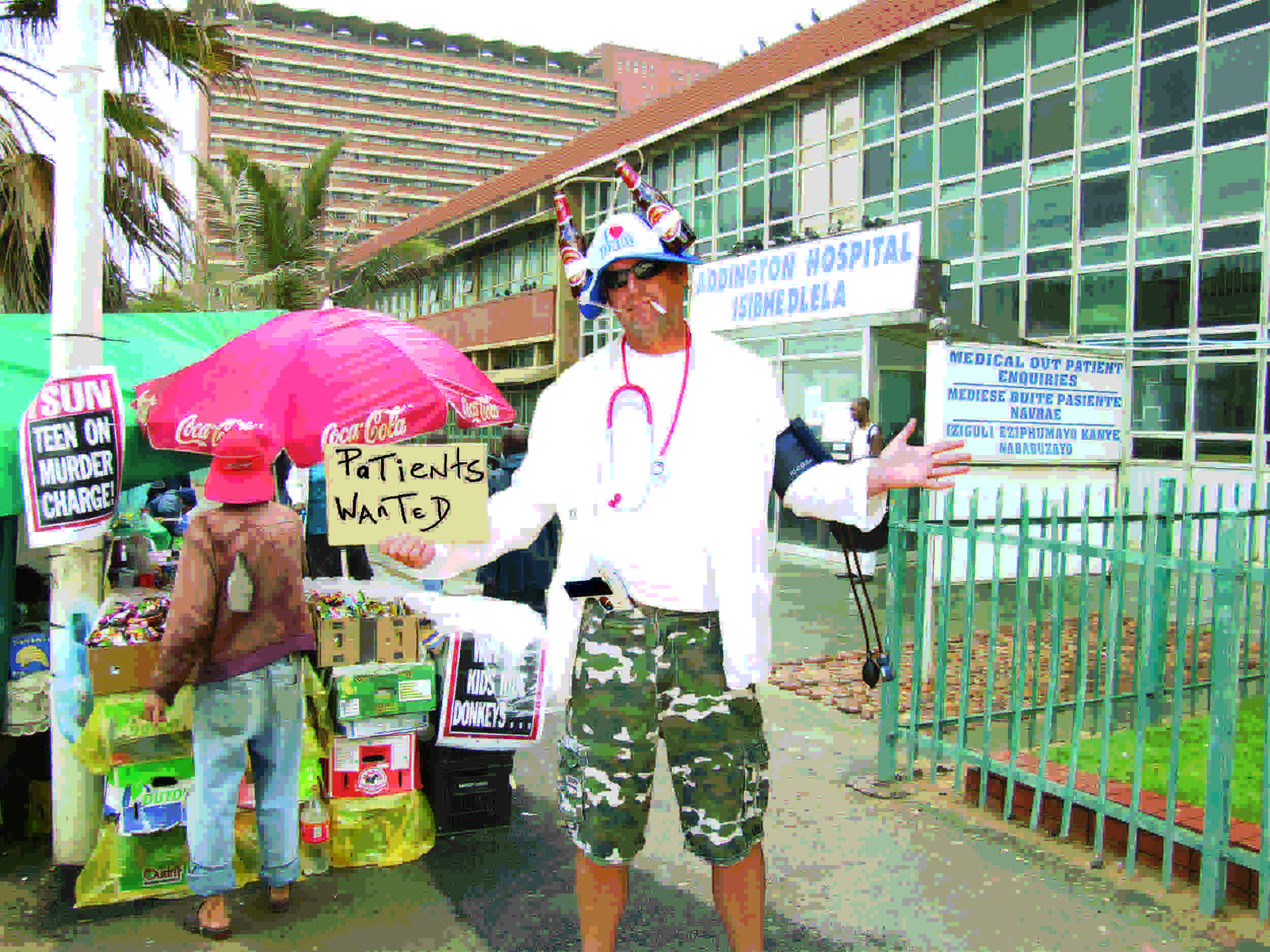 My contribution to Mandela Day 2020 is to repost this column I wrote a few years ago at a time when hospitals weren’t quite the disaster zones they are today.

On Mandela Day, the entrance to Addington Hospital resembled the entrance to the municipal market in Maputo when a fresh shipment of cocaine arrives. The doorway was jammed with hawkers and hustlers, malingerers and malcontents, and at least one second-hand sardine salesman, making it almost impossible for me and Ted to get inside.

“Out of our way, you murderous troglodytes!” Ted shouted, swinging his mop. “We’re on a mission from God!” That’s a bit strong, I thought. Mandela might be responsible for delivering South Africa unto democracy and saving our lily-white asses, but he’s not the ruler of heaven and earth. I am.

Earlier, we had agreed that this year we would do the 67 minutes of community service required of all red-blooded patriots. It seemed a small enough sacrifice compared to what Mandela went through, although having seen this week’s pictures of him at 94, it does seem as if island life agreed with him. I’m not saying it’s for everyone, but plenty of fresh sea air, simple meals and early nights do have their benefits. If you lack the discipline to stick with it, hire a baton-wielding white supremacist to keep you focused.

I suggested we spend 67 minutes on North Beach assisting the lifeguards but Ted had ideas of his own. He had heard people were being asked to report to Addington Hospital to help clean up this abysmal hell-hole. Having something of a history with this terrible place, I was less than enchanted. As a 10-year-old, I spent Christmas Day there having my face stitched up after my uncle tried to kill me with a surfboard. Then, a decade later, a couple of friends carried me in at 2am after a car ploughed into me. The driver was drunk, I was drunk, my friends were drunk, the doctors and nurses were drunk. It was one of those steamy summer nights when everyone in Durban is either drunk or stoned.

Anyway. I wasn’t wild about returning to a place that held such painful memories.

“What do you find in hospitals?” he said, trying to open a beer in my eye socket. I pushed him off. “Sick people,” I said, making the international sign for vomiting. “And drugs,” he said, wiggling his hips. “Lots and lots of them.”

Ted’s plan was that while hundreds of sanctimonious do-gooders were cleaning this pestilential bastion of squalor and disease, we would take advantage of the confusion and stock up on recreational pharmaceuticals.

It was a stupid plan fraught with such danger and potential for disaster that I thought it might just work. So, he with his mop and me with my broom, we fought our way off the street and into the hospital. A security guard tried to stop us but we were too quick for him.

Before we could get into the elevator, a woman with hippopotamic hips and a face like a melted Frisbee escorted us to the volunteer registration station. I was reluctant to register because once your name is on a government list, you’ll spend the rest of your life looking over your shoulder. Once they know there are people out there who are prepared to work for free and don’t belong to a union, you will never sleep easily. The knock on your door could come at any time.

“Come quickly,” they will say. “A million Zimbabweans need to be processed.” Or, “Get dressed, you’re the commissioner of police this week.”

We were each handed a lurid orange bib and a bottle of window cleaner and strict instructions not to go above the second floor. Ted said if the plan failed, we could always become car guards. I warned him about self-fulfilling prophesies but he said I was being paranoid and referred me to the psychiatric ward.

We got into the lift and hit the button for the 15th floor. There wasn’t much up there apart from a view of the harbour and a chapel that looked like it was designed by a committee of German atheists.

We walked through the tuberculosis ward and I held my breath for seven minutes. Ted seemed to think TB wasn’t contagious and offered to lick the wall to prove it. His tongue was rubbing up against the peeling paint when a sister, who looked more like a brother, came around the corner and saw this monstrous act of depravity. In accordance with the government’s see-no-evil policy, she walked right on by.

Many of the wards showed no signs of life, let alone drugs. The obstetrics and gynae department was unnaturally quiet. I was disappointed. There is no more exquisite sound than a woman in full throat during a natural birth.

Ted wandered off hoping to stumble across some kind of pre-parturition peep show while I studied a poster showing a range of labour positions. If Cosatu were that flexible this country’s unemployment crisis would be over.

The baby ward was sealed off with glass doors, presumably to keep the stench from permeating the entire building. It’s not working. They need the kind of doors that are fitted to the Large Hadron Collider.

We sniffed around the circumcision clinic but everything was locked up, which was fortuitous because at this point we would have gladly traded half our willies for a couple of shots of pethidine.

Out on the street, freshly absorbed pathogens incubating in our bodies, a man handed Ted five rand before getting into his car. Better than a kick in the teeth, I suppose.

A last word of advice. If you’re going to be a patient at Addington, you might want to bring your own drugs.