China, eh? Funny old business. I had one of them Chinese in the back of my car once. Well, he was in the boot, actually. Come to think of it, that wasn’t a Chinese at all – it was a spare tyre. Probably made in China, though. It’s a slippery slope. Starts with tyres and next thing you know you’re marching in lockstep and quoting from Chairman Mao’s Little Red Book.

As a precaution I am learning Mandarin. I have learnt how to say, “Please don’t eat me.” This is all the Mandarin anyone needs. They are very big eaters, the Chinese. Well, they’re small eaters, but with big appetites. When Chinese babies are teething, they are given rocks to chew on. This is why there are almost no rocks left in China today. We export a lot of our rocks to Beijing. The Drakensberg will be gone in a few years. Good riddance, I say. It blocks the view and does nothing to help feed the poor.

Did you hear about the Chinese fishing fleet sailing under the radar off our coast? Apparently they snuck in under cover of darkness in the hope of pillaging our sardines. Well done to them, I say. Sardines are the work of the devil. They are slippery customers who will betray you the moment your back is turned. The only honourable member of their family is the anchovy, a humble little fish who is happiest when neatly arranged on a pizza.

Countries are meant to report to the UN’s Food and Agriculture Organisation, the agency that keeps track of global fisheries catches. For instance, Spain might report having caught five million tons in foreign waters in any given year, while the Chinese government is more likely to tell the FAO that its 3 400 vessels operating in the coastal waters of 94 countries caught three swordfish, two mackerel and a snoek. This is nothing more than creative accounting and, in my book, any form of creativity is to be applauded.

Greenpeace, that ragtag bunch of neo-liberal jumper-wearing do-gooders, says that sub-Saharan Africa is the only region on earth where per capita fish consumption is falling as a result of foreign fishing fleets nicking all the aquatic edibles. I don’t know about that. I was at John Dory’s a couple of nights ago and watched a Cro-Magnon family from the hinterland stuffing so much fish into their fat prehensile faces that the only thing in danger of falling was the toddler choking on a giant piece of hake.

A few weeks ago Argentina’s coast guard opened fire on a Chinese trawler fishing illegally in its waters. The trawler sank. Maybe we should bring out the Corvettes. I’m not talking about the patrol boats we bought in our squeaky-clean arms deal, obviously. Those are up on bricks at the moment. I’m talking about the Chevrolet Corvettes I saw driving around Simonstown last time I was there. They could park down by the waters edge, facing the Chinese, and frighten them off with a display of synchronised hooting and revving.

Meanwhile, China appears to have eaten everything in Zimbabwe and gone home. Our appalling neighbour’s annual international trade fair ended this week in Bulawayo. Hall 1 was always China’s turf. You wanted to flog a rhino horn or buy a second-hand Shenyang J-31 fighter jet, you went to Hall 1. Not this year. This year the Russians had occupied Hall 1. I won’t say anything more about this lest Vlad the Impaler calls in an airstrike on my house.

On a more positive note, Zanu-PF commandeered Hall 5 where officials tried to encourage people to join the party. Because no trade fair is really complete until men in dark glasses start rabbit-punching visitors in the kidneys.

Anyway, let’s not be churlish. There aren’t many international trade fairs that can boast of being officially opened by the likes of Togo’s President Faure Essozimna Gnassingbé. There were no Togolese exhibitors at the fair. Perhaps he took the country’s only plane. Either that or the Chinese have eaten Togo.

The Queen of England was caught on camera this week saying she thought the Chinese were “very rude”. That’s rich. Do you know what’s rude? Hogging the throne while your son is desperate to have a go. And having your daughter-in-law whacked. That’s way ruder than the Chinese. On the other hand, stealing Tibet and harvesting the organs of political prisoners is also quite rude.

Right. Enough about the Chinese. Moving on to Oupa Bodibe, a man who sounds more like someone’s avuncular grandfather than a raving jingoistic loyalist. To be fair, he is only the spokespuppet for Gauteng’s education department, so the idea of having South Africa’s coat of arms on every school uniform by 2017 is probably not his. Why stop there? Why not make the uniforms from South African flags? While we’re at it, let’s make sure the kids’ gardens feature nothing but the national flower and they eat nothing but the national fish. Boiled galjoen for breakfast. Yum. They should also have nothing but the national anthem on their iPods and they must replace their pets with the national animal. Council bylaws might have to be amended to accommodate the influx of springboks – a small price to pay if we hope to raise a nation of ANC-voting superpatriots.

Speaking of which, Defence Minister Nosiviwe Mapisa-Nqakula said last week that the defence force was “making progress” in recruiting young white people. There were 103 white recruits in the 2016 intake. This might not sound like progress, but we’re talking about 103 of the best and brightest the white tribe of Africa can offer. Absolute cream of the crop. Don’t for one minute think the army is the only place that would have them. We should all sleep easier at night knowing that they are out there. 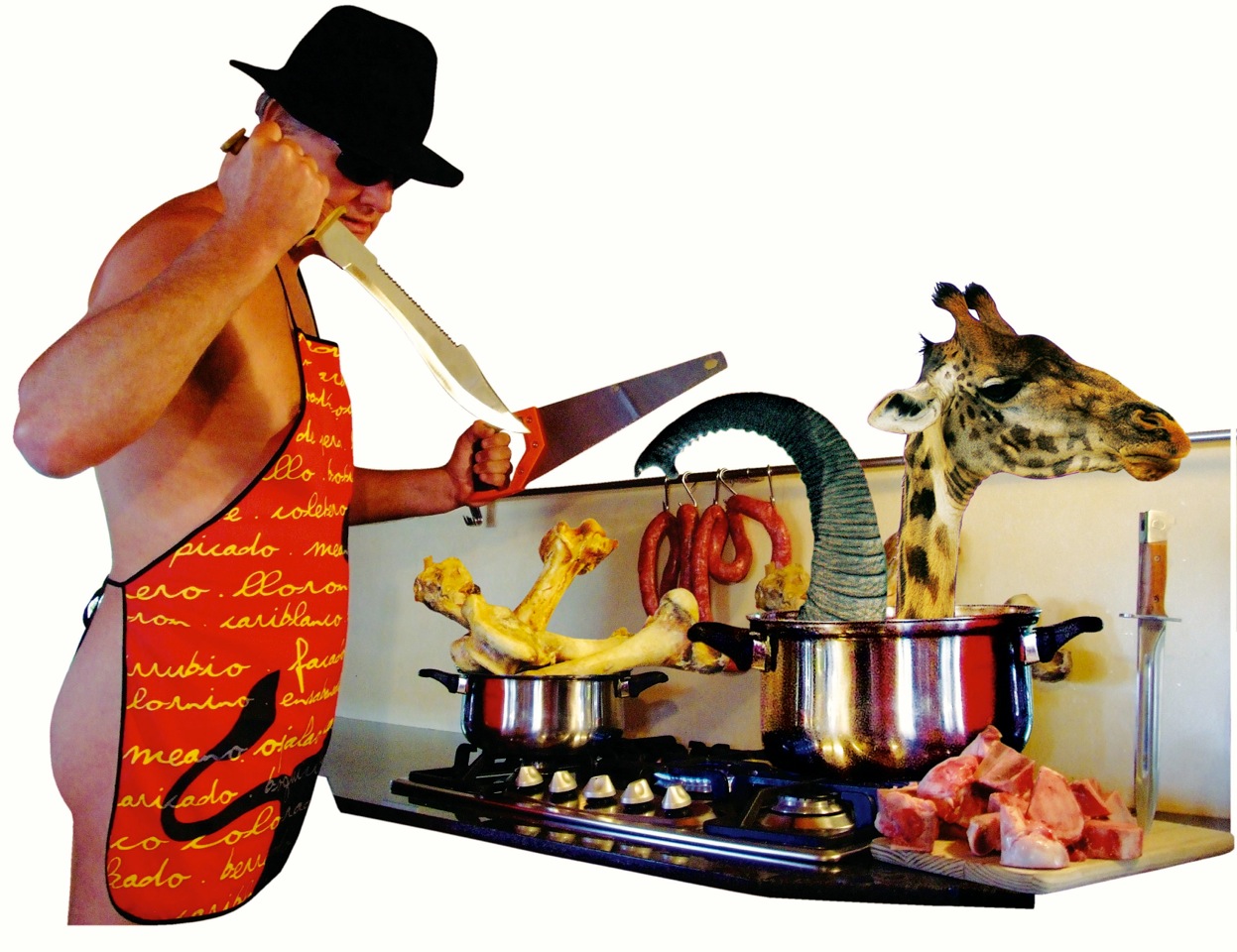 Ben Trovato takes a leaf out of China’s little red recipe book and eats anything that moves.

20 thoughts on “A buffet called Africa”