There are two things I fear most of all. Three, if you include cockroaches. What the hell, let’s throw in praying mantises and make it four. Heavy lifting rounds it off to five.

But all things considered, visiting the hairdresser and the dentist are my number one and number two fears. They are interchangeable depending on the length of my hair and the state of my mouth.

The other day my hat blew off and, before I could pick it up, someone walking past tossed R5 into it. At first I was outraged, but quickly realised that this was a very acceptable way to make money without having to do anything more than stand on a pavement with a glum expression on my face. I write for a living. My face and glum, they go back.

I felt a bit of a fraud shifting from foot to foot, doing nothing more creative than glum-face and expecting to get rich from it. I thought of singing the national anthem but I can only remember the words if I am watching rugby. I tried to picture a rugby match but someone threatened to call the cops when I apparently started shouting abuse at imaginary people.

Homeless chic has never really caught on. Heroin chic, yes. But for some reason, Vogue magazine has yet to unearth the inherent beauty in a weathered, toothless face and a tangled knot of hair that not even the most desperate of beavers would want to live in. That’s assuming you got beavers the size of Etruscan shrews. And who wouldn’t mind living on your head where there are, presumably, few flowing rivers for them to swim in.

I decided to tackle the hair first because I prefer emotional pain to physical pain. Not that I am a big fan of pain of any kind, really. Sure, whip me if you must, but don’t expect me to pay you.

I once told my father about a bad experience I had at a hairdresser. He reacted as if I had told him about a particularly unhappy ending at a Thai massage parlour.

“You go to a hairdresser?” he barked. “Are you gay?” He wanted to know why I didn’t go to a barber like a normal man. He, incidentally, hasn’t been to a barber in maybe twenty years. Instead, he cuts his own hair. Charles Manson looks like a Vidal Sassoon poster boy compared to my father.

I didn’t even know barbers still existed. The last time I went to one, the army gave me a gun and told me to go off and kill perfect strangers.

Hairdressers are only marginally less fraught with hidden horrors. I cannot simply walk into one and ask for a haircut. It seems too brazen, too careless. What if it is a trap? What if it’s not really a hairdressing salon, but a front for a government agency that secretly experiments on your brain and then injects you with a substance that makes you forget it ever happened?

So what I do is walk past the salon several times. All nonchalant, like. I don’t look inside every time I pass by because that would arouse suspicions and then I would have to leave the shopping centre at once, before they could alert the network.

They are up to something, there is no doubt about it. I have seen intelligent women go into hairdressers and come out five hours later, unable to talk about anything but their hair. And if you fail to compliment them on it every seven minutes, they fly into a rage and threaten to cut your willy off.

My main fear, though, is that once I am trapped in the chair, they will try to talk to me. It’s bad enough worrying that I am going to walk out and want to go straight to a gay bar. But the idea of having to engage in conversation with the cutter fills me with a bubbling black dread.

What if she is deeply offended by something I say? We don’t know that she won’t suddenly start stabbing at my jugular. It may even be me that does the stabbing. My tolerance level for small talk is dangerously low.

This week I found a hairdresser that, on the surface, seemed safe enough. There was one other person in there. She had a beehive-shaped piece of hardware over her head that was almost certainly rearranging the neurons in her cerebral cortex. I put on my dark glasses, slipped inside and made discreet enquiries.

Within two minutes I had a woman shampooing my hair and massaging my scalp. This seemed inappropriately intimate but I hesitated to introduce myself for fear of opening the verbal floodgates.

Once that enormous pink sheet was draped over me, I looked like a giant tick that had been sucking on a cow for way too long. My tiny head and swollen body wasn’t something I could look at in a mirror for longer than a few seconds. It made me want to throw up.

“What do you want?” she said, retching daintily into a tissue.

What kind of question is that? We don’t go to hospital with a limb that has been caught in a threshing machine and expect the doctor to ask what we would like done. Fix me, dammit! You’re the professional, here.

From the hairdresser, I went to a gay bar and then the dentist. It was the only bar in the area, okay? I didn’t actively seek it out. It was there. I was traumatised and I needed a drink. Besides, I imagine dentists rather enjoy the smell of a fine whiskey emanating from their patients’ face holes. I have to say though, that I have had whiskies that tasted worse than a periodontal disease.

My previous dentist removed five of my teeth because he wanted to go to the Seychelles for a week and thought it a good idea to get me to help pay for his airfare. He sold me some kind of prehistoric metal plate with imitation teeth embedded in it. It was like something the Catholics might have invented during the Inquisition to punish the heretics and I never wore it except when I went out. Then I stopped going out and something changed in my mouth because the next time I wanted to go out, it wouldn’t fit.

While walking the streets in search of a new dentist, I came across a building full of them. All were Jewish. Which is fine. Relax. It’s fine! Some of my best friends know people who have Jewish friends. I googled their names on my iPad, finally settling on someone who was also a musician. I hoped he was a dentist who dabbled in music and not the other way around. I saw a clip of him on his website. He had a lovely voice. I hoped he might sing as he worked. Might as well score a free gig while helping him to pay off his holiday home in Tuscany.

Flat on my back, I enquired about implants and he gave my moobs a squeeze. He said they felt fine and that men shouldn’t really go bigger than a size AA.

No, of course he didn’t. He sent me down the corridor to have my mouth scanned. In the old days, i.e. the last time I went to a dentist, an X-ray machine fired deadly radiation into my face. Now it costs a lot more and is done with a scanner. I was told to close my eyes – probably so that I wouldn’t see the receptionist sketching my teeth and scanning it into the computer.

Implants are hellishly expensive. In fact, if you could sell all your teeth for the price of implants, you would make R480-thousand. Would you rather keep all your teeth or have nearly half a million rand in the bank? Take the money, you idiot! You can easily survive on mashed potatoes and beer. With that kind of cash, you could even gum your way through mounds of expensive stuff. Oysters. Sushi. Cocaine. 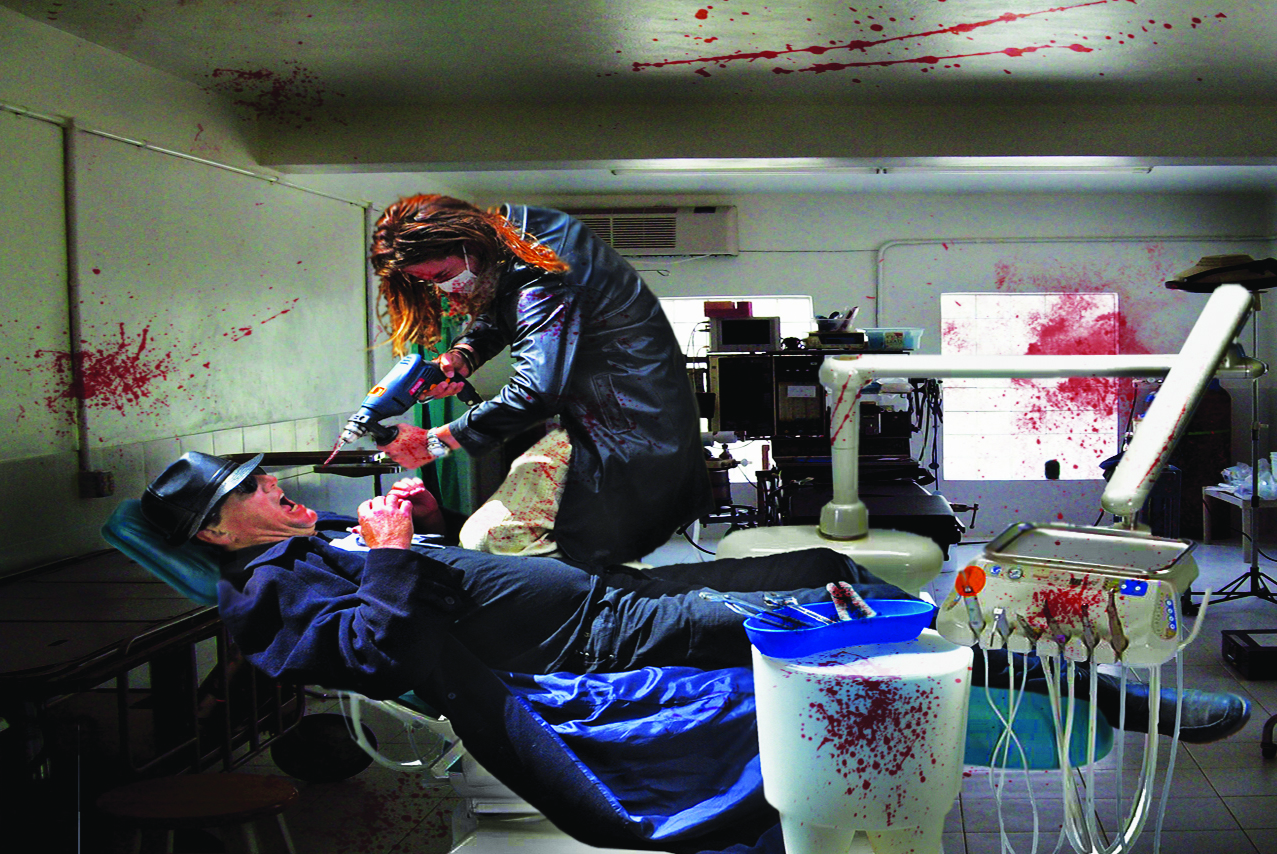 5 thoughts on “An inconvenient tooth”