There is so much barbarity and horror in the news these days that when a feel-good story from another country pops up, it gives one sufficient cause to break out the amyl nitrate and dancing girls. It is only people who live in South Africa that would consider a deadly shootout between rival motorcycle gangs in Texas to be a feel-good story. Maybe it’s just me.

I have always wanted to be in a motorcycle gang but I can’t grow a proper beard – it simply loiters with intent in the jowl area – nor do I have any tattoos. And I far prefer the snarling savagery of a dirt bike over the growling conceit of a Harley Davidson, a bike that’s all torque and no real action.

I like the names biker gangs have in the States. Hells Angels. Bandidos. Cossacks. Mongols. Outlaws. Pagans. The Hells Angels are so hardcore they don’t even bother with the apostrophe. It’s one of the reasons I could never join them. I’d be the one with the marker pen eventually getting stomped because I was forever fiddling with their leather jackets.

Ohio has the Zulus Motorcycle Club. They make it clear on their website that they “only accept real brothas that aren’t afraid to put it down on the slab”. What’s more, these brothas didn’t call themselves Zulus just for the hell of it. “Some of the original members actually met with Zulu tribesmen and learned the ways of being a great warrior nation.” The Zulus apparently saw their American brothas as “warriors that ride the iron horse” and gave them permission to call themselves Zulus, “with the promise to uphold the ways of the great Zulu tribe of Africa”.

In return, the bikers “gave sets of our colours to them so they have a piece of our club within their tribe”. I bet that’s what happened to Piet Retief and his men when they dropped in on King Dingane for a calabash of umqombothi. They were wearing the colours of Die Boere Bikers van God. Obviously there was going to be trouble. 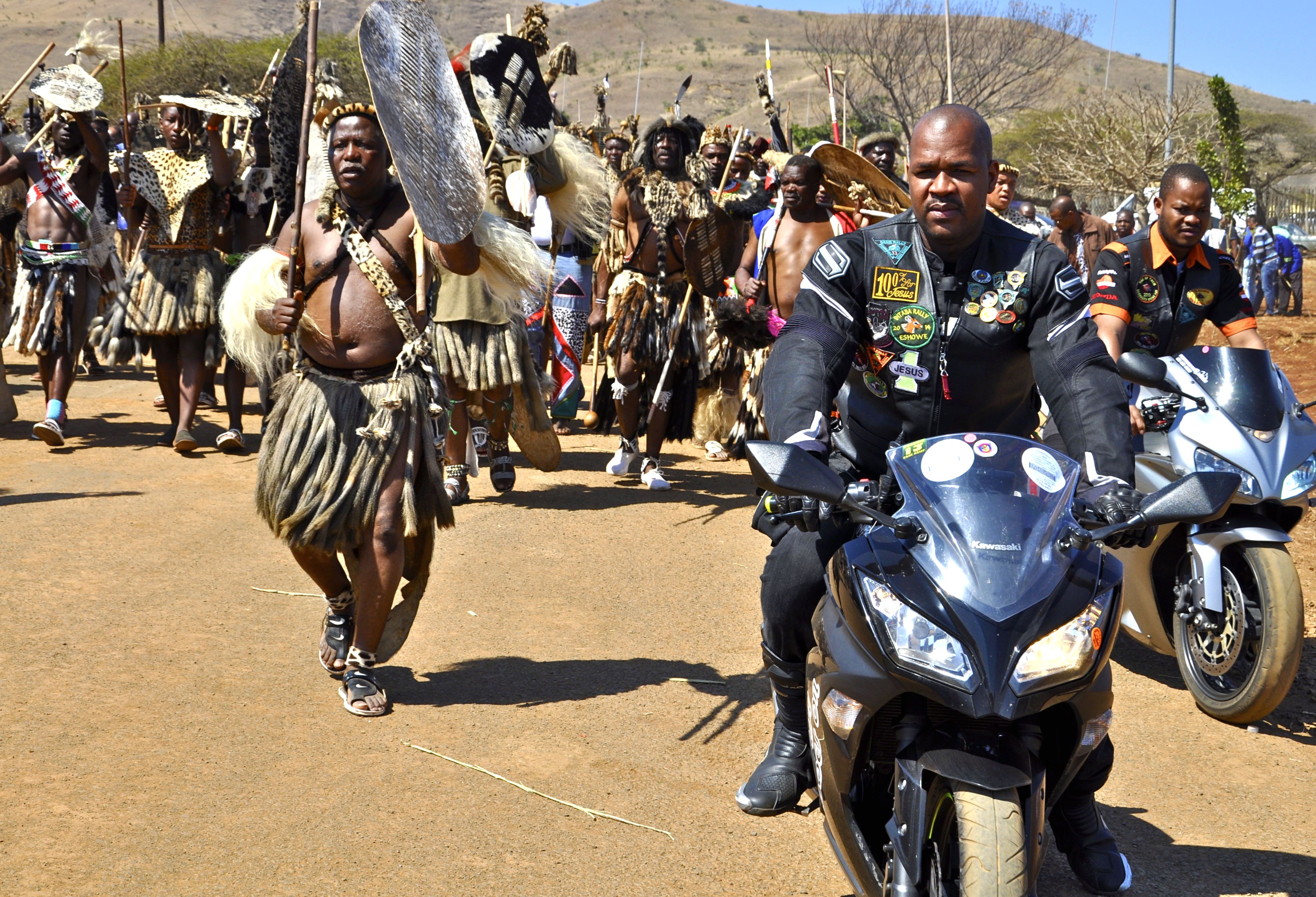 We have our own gangs, but their names need work. The Sowetan Eagles sound like a newsletter produced by the Percy FitzPatrick Institute of African Ornithology. Roodepoort has the Active Disciples Riding 4 Jesus. I wouldn’t tangle with them under any circumstances. I bet they take Bible-punching to a whole new level. Cape Town has the Anonymous Riders but they never get together because none of the members know where anyone lives or even who they are. And, sure, we also have our very own Hells Angels. They have six chapters in South Africa. Or, as their website would have it, “charters”. No apostrophe and a spelling mistake? You don’t get more badass than that.

Speaking of Piet Retief and betrayals of trust, I once lost a much-loved motorcycle and along with it any hope I ever had of starting my own gang. I was living in Cape Town, the wrong place to own a 1974 Yamaha XT500. Endlessly kick-starting a pigheaded thumper in torrential rain is one thing, but crash-starting it down a wet hill at 3am only to have the back wheel lock up as you reach the intersection is another altogether. I had a decal of a flaming eyeball on the petrol tank and the brute had spent many years trying to kill me. It was time to part ways.

I put an ad in the paper. If someone was prepared to give me R9 500, they’d be saving my life and keeping me in beer for a weekend.

The first person who called asked about the condition of the bike. I lied like anyone else selling second-hand goods. He asked what time would be convenient to come around and take a look at it. I was in Hermanus sowing wild oats and other seeds of my ultimate discontent. The bike was parked on the pavement outside my rented hovel in Sea Point.
“I’m out of town,” I said. “But feel free to go along and take a look at it.” I told him where the bike was parked. He said he’d have difficulty making a decision without taking it for a ride. And that’s when it happened.

I don’t know if there was something in the filth I was drinking, but I was momentarily suffused with an overwhelming faith in my fellow man. I told him that he could start it with a 50c coin or even his house key. It’s one of Yamaha’s more intriguing security features on the older XT500.

“When you’re done, leave it where you found it and give me a call,” I said. There was a long silence. “What if I steal it?” he said. I laughed. “You won’t. You told me your name and I have your number on my cell.” He laughed, then I laughed. Then he laughed some more. “Call me when you’re done,” I said, instantly forgetting his name and accidentally deleting his number.

When I got back to Sea Point, all that remained of my bike was an oil stain on the tar.

I was saddened not so much by my own stupidity, but because me and the Flaming Eyeball had a history. We had been up mountains together. We had fallen over together. We had evaded traffic cops and angry motorists. We had done everything a normal couple does except bicker and throw things at each other. Also, we never slept together. Much like a marriage that’s gone on for too long. And like so many others, this was a marriage that had been destroyed through a betrayal of trust.

“I trust you” has overtaken “I love you” as the most treacherous phrase in common use today. Trust is a viper in the slippery hands of those who prey on the weak and vulnerable. Look, I’m not saying that I am weak and vulnerable. Far from it. I weigh 100kgs and have never had second thoughts about snapping the spine of a kabelou as it twists on the end of the line fighting to get at my jugular.
Several other people phoned about the bike in the days that followed. The words, “Sorry, it’s been taken” have never rung more true. 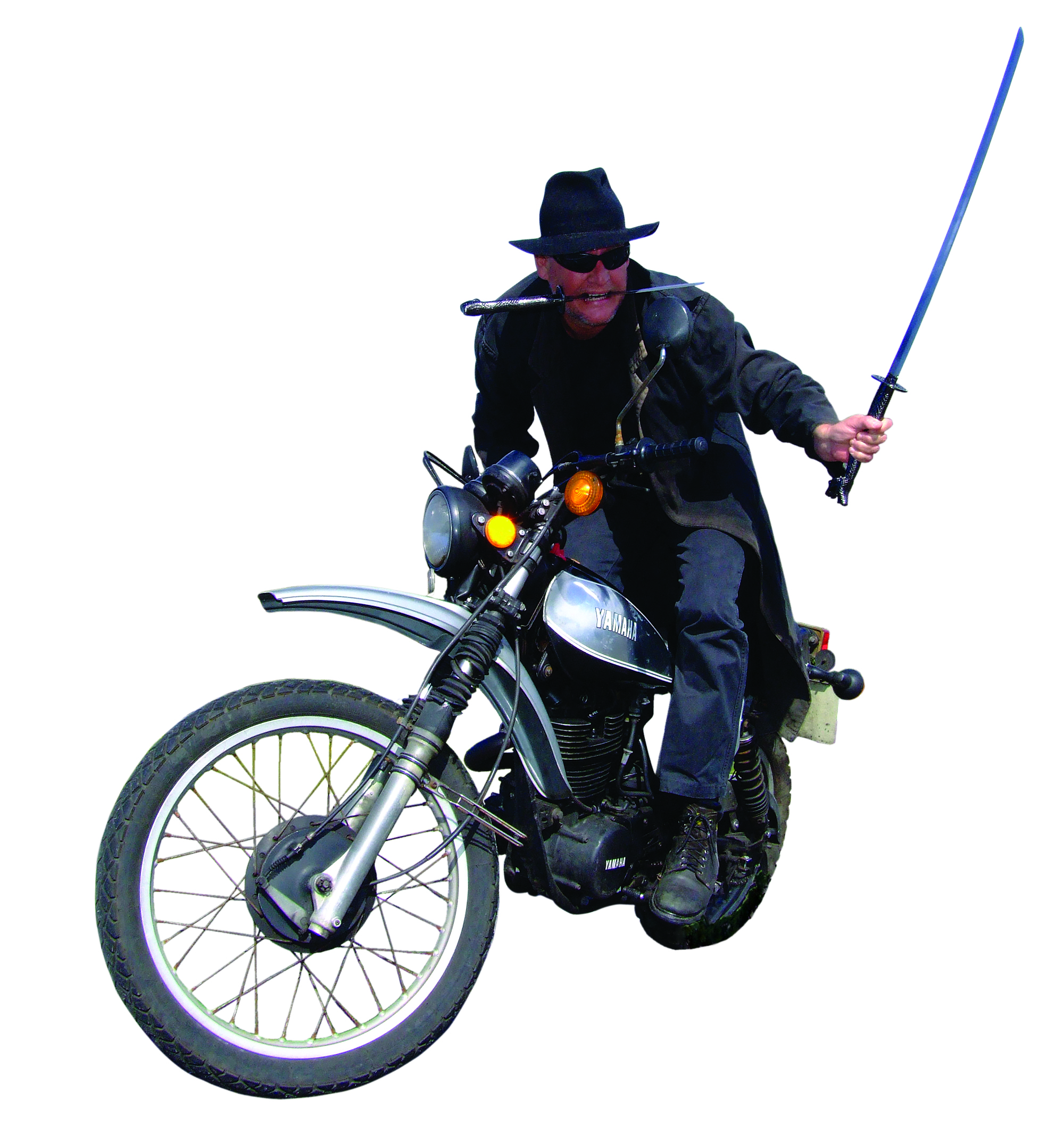 I expect every man, woman and child reading this to be on the lookout for a black unlicensed XT500 with dysfunctional lights, a broken speedometer and a flaming eyeball on the tank. Unless the thief is as moronic as I am, it’s likely that the Durban number plate is already a souvenir on someone’s bedroom wall. It also comes trailing a string of outstanding warrants, but you wouldn’t know that just by looking at it.
If you spot my bike, make a citizen’s arrest. Even if you are travelling at high speed, run him off the road. Try to minimise damage to the bike. There is a reward, of course. Vigilante justice doesn’t come cheap these days. Bring me my bike, or even one that looks like it could be mine, and you will receive a signed copy of my latest book and a bottle of tequila.

3 thoughts on “Jose Cuervo for the Flaming Eyeball”