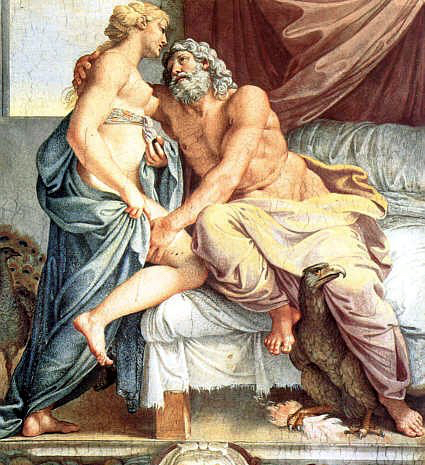 I cannot bring myself to write another column about the only thing people are writing columns about. How much more can be said about a virus, a lockdown or a government that … I can’t. I just can’t. All I can say is, at least we don’t live in America. Given the choice between a Clicks card and a Green Card, don’t bother looking for me at the airport. I’ll be at the self-medication counter.

What else do we have in common that’s unrelated to the mangled phantasmagoria that now passes for life on earth? A lack of appreciation for art? An aversion to hard work? A hankering for moist vanilla cake? Inspiring stuff. Hold on. How about June? We all have to live through June. April and May were the months of things of which we shan’t speak. But June. Now there’s a word redolent with possibility.

Juno, from whence June was named, is portrayed as either a cruel and savage goddess or a kind and loving one. Much like every woman I’ve ever known, depending on how hungry she was at any given time. Juno was married to Jupiter, king of the gods, who was also her brother. I imagine anyone would be a little unpredictable under those circumstances.

Not everyone in the world feels the same way about June. In the northern hemisphere, June makes people want to drink and have sex with each other. Out here in the southern hemisphere, June makes us want to drink and kill each other. Which isn’t all that different from other months, admittedly. It’s just that the onset of winter makes us more homicidal than usual.

In the United States, June is African-American Music Appreciation Month. Speaking from a panic room in the White House, President Trump called on black Americans to show more appreciation for their music and focus less on trying not to be murdered by the police.

June is National Smile Month is the United Kingdom’s largest oral health campaign, which is ironic given the torrent of filthy lies that spews from the mouths of Boris Johnson and his disturbing organ-grinder Dominic Cummings.

Monday, 1 June, was World Milk Day. It was also the day bottle stores reopened after weeks of prohibition. Forget milk. If you drank anything other than alcohol on Monday, you’re not a true South African and ought to be ashamed of yourself. I suggest that 1 June henceforth be celebrated in this country as National Drunk Day. June 2 should also be declared a public holiday. Let’s call it National Hangover Day.

Wednesday was Opium Suppression Movement Day in Taiwan. No wonder nobody wants to recognise them. If there’s one thing the world needs right now, it’s more opium. It should be piped into office buildings and shopping malls everywhere. Stop with the suppression, Taiwan. It’s not cool.

June 19 is World Sauntering Day. I am an accomplished saunterer and would easily take gold if sauntering were to ever become an Olympic sport.

June 23 is International Widows Day, a day for mourning and, for some, a day for celebrating.

No. I can’t do this either. I’d rather pour superglue into my eyes than keep writing about things that happen in June. The plague is the only thing to write about for the foreseeable future. There’s a redundant phrase for you. If the future is anything at all, it’s certainly not foreseeable.

I’m writing this on Monday afternoon after having opened my first beer in what feels like forever. That first cold gush of beery goodness sent my body into paroxysms of happiness. Well, maybe not my entire body. There will always be the odd organ or gland that sits there, arms folded, unwilling to join in the fun. “Here we go again,” they say, shaking their little sanctimonious heads.

I can’t say I’ve felt better for not drinking these past few weeks. Well, I suppose I can’t really say I haven’t been drinking. Technically, I did have a bit of gin and maybe a spot of rum. And the odd tequila shooter. But I don’t count that as drinking. That’s cocktails, that is. Now, beer. That’s different. Beer is a real drinking man’s drink. Look at that. I’ve only had one and already I’m making no sense.

Cursed with a pathological loathing for queues, there was no way I was going to go to the bottle store on Monday. I would give it two or three days to allow the stampede to subside to a dull roar. To my credit, I did make it to 10am before cracking.

The best thing about masks and social distancing is that it makes chatting to strangers difficult. I find chatting to friends difficult enough. I could see there were people in the queue who wanted to chat. What would we say? Been a while, hey. Yep. Thirsty. Yup. Looking forward to a sundowner. Yeah, right. Like you’re going to wait for sunset before tucking in. Haha. How about you? Well, since you ask, I intend experimenting heavily with many different kinds of alcohol and fully expect that, by the weekend, I will have met and married my third wife, discovered a vaccine for Covid-19 and learnt how to speak fluent cat. Never underestimate the power of alcohol.

Mostly, though, the people in the queue just wanted everyone else to think they aren’t like the desperadoes and berserkers who started queueing at 5am. We’re all just normal social drinkers lining up outside a liquor store at 10am on a Monday. Quite normal.

But their eyes betrayed them. Their eyes said they were anxious. What if they run out of stock before I can get inside? Should I become a wine drinker? And the unspoken fear of fears. What if I’ve actually enjoyed being sober and no longer relish that warm glow of incipient inebriation?

I want to turn around and reassure everyone that it’s all going to be okay. That this is only Level 3 and look at us, standing outside a bottle store that’s not shut or on fire. There are no vicious cops in sight, no carts being pushed through the village with a man shouting, “Bring out your dead!”

Life is good! We can buy rotisserie chickens! Our domestic workers can return! Life can only get better from here on. For a start, the giddy pleasures and wild delights of Level 2 have yet to be made known to us. And, if we are to speak of Level 1, let us do it in hushed, reverential tones. We dare not even contemplate what ineffable rewards our benevolent overlords may bestow upon our unworthy heads should we live long enough to make it to this mythical moment in time.