Here’s an interview I did with Jacob Zuma in 2008.
Gel or soap
I’m not much of a gel man, myself. Gel can only prevent you from catching cancer and not much else. A bar of Lifebuoy, on the other hand, takes care of Aids, tuberculosis and yellow fever. I always shower after having sex. So you can imagine how healthy I am after washing seven or sometimes even ten times a day.
Polygamy
I am a big man. Bigger than you think. It is impossible for just one woman to satisfy me. Besides, it is in my culture to have many wives. The more the merrier. I think maybe Hugh Hefner has some Zulu blood in him, but most white men can’t handle more than one wife because they allow them to wear the pants. In my house, I am the boss. None of my wives nag me to fix the roof or ask me where I’ve been when I work late.
The right to bear arms
I am very disappointed that even though I am president of the ANC, nobody has bothered to bring me my machine gun. I have made it clear enough, haven’t I? After all, there aren’t that many lyrics. It’s not as if people could miss the message. Awuleth’ mshini wam. Bring me my machine gun. A simple request from a simple man. Anyway, I’m hoping that someone will find it and bring it to me before my trial starts in September. My machine gun may well influence the outcome.
Education
I am living proof that you do not need an education to rise to the highest office in the land. Comrade Thabo might as well have spent his youth exploring the fleshpots of Europe for all the good those years of studying did him. Of course, it helps to be able to read and write. Everyone should at least be able to read a charge sheet and write an affidavit. But things like maths and biology and all that other rubbish are a waste of time. My advice to the youth is this: learn how to herd cows and goats. A good herdsboy learns how to think and act like a goat. Once you perfect this skill, you can go into politics and even become president one day.
Economic policy
As you know, inflation is sitting at around 60% … or is that unemployment? Maybe it was the matric pass rate. Anyway, it’s not important. These are just numbers. When I am president of the country, I will reset everything to zero and start again from scratch.
Finance
Being able to work out sums is very important when it comes to finance. I was lucky in that I learnt to count from a very young age. When it’s your responsibility to make sure that none of your cattle stray onto the N2, you need to keep track of the numbers. In my culture, cows are money. Unfortunately, a lot of businesses like airlines and clothing shops no longer accept cows as payment. If you don’t have money, you borrow it. This is how global finance operates. Sometimes our government borrows money from institutions overseas. I only borrowed money from Schabir Shaik because he offered better terms than the World Bank. Zero repayments over a period of no years. You don’t get better than that!
The charges
Racketeering? Money laundering? Who do these people think I am? Al Capone? My government created the Scorpions so that they could investigate the real criminals, not decent law-abiding patriots like me and Jackie Selebi. What on earth were they thinking? I will fight these trumped-up charges tooth and nail. Oh yes, before I forget, I would like to thank all those taxpayers who will be making it possible for me to afford the best lawyers around. When I am president, I will give everyone a tax holiday for a week.
The media
There is a perception that I regard journalists as devils. This is not true. They are worse than devils. They are like filthy rats that eat the ship they live on and then jump onto another ship when that one starts sinking. I am just one of their ships. They have many. But I am not concerned. I am suing that scoundrel, Zapiro, for R10-million. With the money, I will start my own newspaper and get parliament to pass a law making it compulsory for everyone to read it. Anyone caught buying any other newspaper will be put to death.
Thabo Mbeki
Comrade Thabo and I go back a long way. He is a very dear friend. Two men couldn’t be closer without actually being gay. We are like Caesar and Brutus, Kennedy and Oswald, Martin Luther King and James Earl Ray, Verwoerd and Tsafendas. You get the picture. 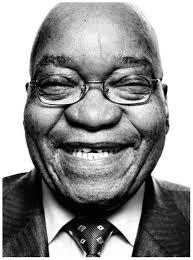 5 thoughts on “Q&A with Jacob Zuma – from the archives”