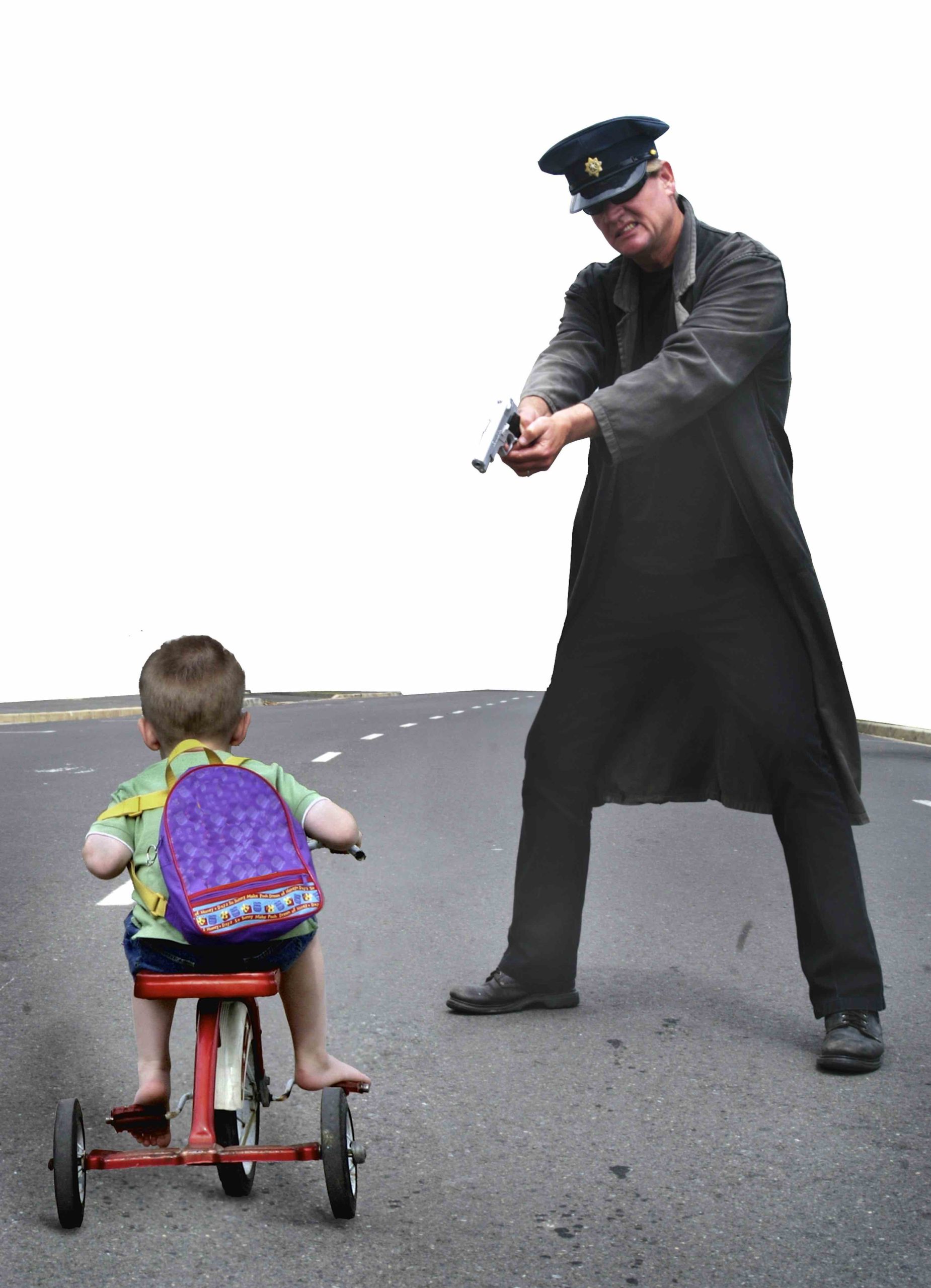 I was surprised to hear that police in America kill roughly a thousand people a year. Not very impressive for a country that size. Here, our police get through that many in a month. Okay, I’m exaggerating. So shoot me.

Frankly, I don’t know why people are surprised. You know what would surprise me? If it turned out that the Ku Klux Klan was being funded by the Dalai Lama. Or that Steve Hofmeyr and Floyd Shivambu were romantically involved.

If a physics professor had to kill a bunch of people in the course of his work, I’d raise an eyebrow. But when I read that a cop has killed someone, I sigh and shake my head and open another beer. It’s a tragedy, but it’s about as unexpected as one of Helen Zille’s tone deaf tweets.

To become a policeman in this country, “you must be able to pass the psychological assessment administered by SAPS, which determines that you fit the profile of a police official”. The funny thing is, the very qualities that make you fit to be a policemen are the exact same qualities that should disqualify you from becoming one. It’s a sort of Dunning-Kruger effect for law enforcement.

Now there’s a word that makes you sit up and take notice. Enforcement. What do you think when you hear it? It evinces in me a fight or flight response. Or, more accurately, flight, followed by confrontation, then fight, maybe a bit more flight and, finally, handcuffs or hospital.

Some people are natural born enforcers. They can be found working as bouncers, repo men or bank managers. The rest are in the police. Obviously I’m talking about cops on the beat and not those who work in departments like forensics, ballistics, catering and so on, where they are hardly ever called upon to shoot someone in the face.

You might say we are all capable of killing a person if we really had to, and you’d be right. But we most likely wouldn’t be able to because it’s impossible to get a firearm licence and our knife skills are limited to buttering toast.

I’m not sure I have what it takes to kill people. I only recently stopped fishing moths out of the toilet, and that’s more because of lower back issues than any desire to watch the little fuckers drown.

You also have to be the kind of person who takes pleasure in telling other people what to do. Or, more accurately, what not to do. You need to enjoy taking command of situations. You can’t, for instance, be assigned to crowd control and then wander about saying, “I think everyone should just do whatever they want, man.” Your fellow officers are unlikely to appreciate it. The crowd would, though. They’d hug you and fist-bump you and pretty girls would offer to have sex with you. If I ever became a cop, I’d be that guy.

And you need to have a thing for uniforms. I pretty much wear the same clothes every day, but that’s more of a pandemic peccadillo than a predilection for uniforms. Some people turn into Nazis the moment they put on a uniform. Give a man a fishing rod and he’ll sell it for drugs. But give a man a uniform and a fishing rod and in no time at all he’ll be pepper spraying you and confiscating your fish.

We all know someone who possesses the attributes of a law enforcement officer. It could be a work colleague, a relative or even your spouse, although why you’d marry someone like that is a mystery to me. To be fair, they usually only become like that over time.

I saw them in the army. Even though we were all still teenagers, these guys were determined to make lance-corporal just to be able to have that tiny bit of authority over the rest of us who never gave a damn about rank and just wanted to get through two years without being shot or sent to DB.

The corporate world is awash in people with the instincts of policemen. I am ashamed to admit there have been times in my life that I have been a boss of people. One of the occupational hazards of working in the private sector, as opposed to the civil service, is that promotion is often a consequence of competence. I was merely the best of a bad bunch.

Having drunk from the poisoned chalice of middle management, I can say that I lacked whatever it took to rule through fear. Lacked might be the wrong word. We all have the capacity to be screaming banshees and utter bastards, but I got the best from my underlings without hardly ever having to put on the administrative jackboots. My crew knew it was okay to have a few drinks at lunch or arrive at work lightly stoned. Just as long as I could do the same. Egalitarianism rocks.

If someone had to force me, at gunpoint, to join the police, I’d choose whatever department it is that hostage negotiators work in. I imagine it’s the department with a Jacuzzi around the back, cold beer on tap and naked Polish fire dancers three times a week, otherwise what’s the point in having these mad negotiating skills.

In a situation, I’d ask to speak to the hostages. Get them to see things from another perspective. Make them realise that he’s so much more than just a maniac with a gun. I’d get them doing mindfulness exercises, then I’d walk in with my hands up and convince the hostage-taker to take us all to a nearby bar because it’s happy hour. The police would then have to bring in a second hostage negotiator to negotiate with me and I’d negotiate with that hostage negotiator to come into the bar and before you know it the place would be heaving with happy drunk hostages and hostage negotiators and a relaxed hostage taker and the police would eventually give up and leave and we’d all live happily ever after in a bar that never closes or opens.

I have met policemen in my life, but I have never had one over for dinner or a game of charades. When I was younger, a friend – let’s call him Gavin Meiring, because that’s his name – chose to do his national service in the police rather than the army. One afternoon he arrived at Durban’s Bay of Plenty in his yellow fokofpolisiekar. A few of us had been surfing and Constable Meiring seemed not to mind us climbing into the back of the van for a laugh. Then someone found a twist of weed ditched by a proper prisoner and we confiscated it right away.

My own father was a cop for the first few months of my life. He signed up because he fancied the idea of being a detective. That explained why, when I was older, he would interrogate me in the most brutal of fashions when I came home late after crashing the car. Anyway, his supervisor kept him on the beat, where he accumulated an impressive array of home-made knives and bloodstained screwdrivers that he’d bring home for me to play with.

We need to change the system. Stop recruiting people just because they have a matric, no visible tattoos, can speak a recognisable language and can’t get a job anywhere else. Let’s start hiring philosophers, psychologists and lapsed lawyers. Unleash brain power, not firepower. Open minds, not wounds. Spray love, not teargas. It’s very late. I should probably go and lie down.

3 thoughts on “Scaring the nation with their guns & ammunition”