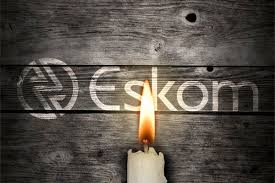 Eskom has been fucking with us for years and there’s no end in sight. Here’s a letter I wrote to the boss of the power utility in 2011. This was before the Guptas even got their claws into it.

This is the fourth time I am writing this letter to you. The first three times you turned the power off before I could press save. I was angry before. I am now incensed.

I live in Cape Town, supposedly one of the most beautiful cities in the world, but what the hell good does that do when I can’t see anything for most of the time? Oh, sure, the sun still works, but how much longer can it be before you find a way to switch that off too?

The first time Eskom plunged the province into darkness, you kept very quiet and hoped nobody had noticed. Truth is, we weren’t too bothered. Unless you were on a life support machine. But it was a novelty. The power cut forced married couples to go to bed early where, without the option of reading or television, they were left with no alternative but to have sex. Apparently this helps to keep couples together. Or at least from killing each other.

Then you turned the power off several more times over the next few weeks. Suddenly it wasn’t such fun. Weeping women, saturated with sex, begged their husbands to sell up and emigrate to a country with electricity.

People began going hungry, fridges defrosted, beers got warm. The only thing moving in the streets were four men on horseback riding from town to town shouting in what sounded like Aramaic.

You, in the meantime, denied that anything was wrong. “Relax,” you said. “Everything’s under control.” The rolling blackouts got worse. Suburb after suburb, town after town, became engulfed in darkness.

Your men in suits went into a huddle. “The masses are revolting. What are we going to call this thing?” A middle-ranking executive blew his chances of ever getting promoted by replying: “An unmitigated fucking disaster?” But the truth is not something to be bandied about at times like these, is it?

“Let’s call it load shedding,” you said brightly. “That makes it sound like we are getting rid of something that we have too much of. People will want to thank us.”

Apparently not, though. Instead, people wanted to hunt you down and ram a syringe full of sodium pentathol, or any kind of truth serum, into your fat lying capitalist arse.

Once the ANC had pointed out that your incompetence was going to lose them control of Cape Town, which it subsequently did, you said sorry in a very small voice and pretended to cry.

The then public enterprises minister, Alec Erwin, felt so bad for you that he made up a story about a bunch of imaginary warlocks throwing a bolt into one of the Koeberg nuclear power station’s generators, damaging a rotor and causing a serious power shortfall in the Western Cape.

Since Koeberg is your baby, and a potentially lethal one at that, the last thing you wanted was the government suggesting that just anyone could walk up to the facility and gain entrance by scaling a wall. Oops, sorry, Greenpeace already did that several years ago.

So you dismissed Erwin’s claim. Erwin, under the mistaken impression that you were right behind him, quickly denied ever mentioning the word “sabotage” or even knowing where Koeberg was. “Look,” said Erwin, “I don’t even use electricity. I’m a gas man, myself.”

So not only were we surviving on tins of baked beans heated over cheap candles, but we now also knew that our shivering bodies could be incinerated in a boiling tsunami of radioactive particles at any moment.

Then, once businesses hit the magical mark of R500-million in losses, you began publishing a load shedding schedule in the local newspapers. But even then, you never lost your keen sense of humour. I bet you found it hard to stifle a giggle when you tricked people into thinking that they would be without power from 2.30pm to 4.30pm on Wednesday, only for the lights to go out from 7pm to midnight on Thursday. You did this, with a twinkle in your eye, in towns around the Western Cape. And sometimes even in the Northern Cape, although it’s not quite as much of a laugh for you because the folk in Kimberley don’t even notice these things.

Sometimes, in the middle of a spot of load shedding, you would switch the power back on and then, a few seconds later, turn it off. What’s the point of earning R13-million a year if you can’t have a bit of fun? If you have the ability to make millions of people go “yay!” and, moments later, “fuuuck!” in perfect synchronisation, then you should go right ahead and do it. I know I would.

In the unlikely event that you decide to do the decent thing and resign, I would like to be the first to propose that Homer Simpson takes your place. He has worked at the Springfield Nuclear Power Station and will cause far less mayhem than you already have.

Apart from the loose bolt, short circuits caused by mist and soot, an unusually high tide at Llandudno beach and the gay pride parade, the power crisis is the result of you believing in 1998 (accurately, as it turned out), that South Africa was doomed to become just another corrupt debt-ridden crime-ravaged basket case and consequently there was no point in maintaining your power stations or even building new ones because they would just be taken over by squatters or stripped down and sold on the black market.

In the intervening years the population has grown and a lot more boys have reached drinking age. More shebeens means more fridges to keep more beers cold. Now there is simply not enough electricity to keep all those new fridges running. This is how countries descend into civil war.

Now you are asking us to help you by bathing in cold water, cooking over primus stoves, washing our clothes in the river and eating by candlelight. It’s fine for the majority, but we white folk are simply not accustomed to this lifestyle.