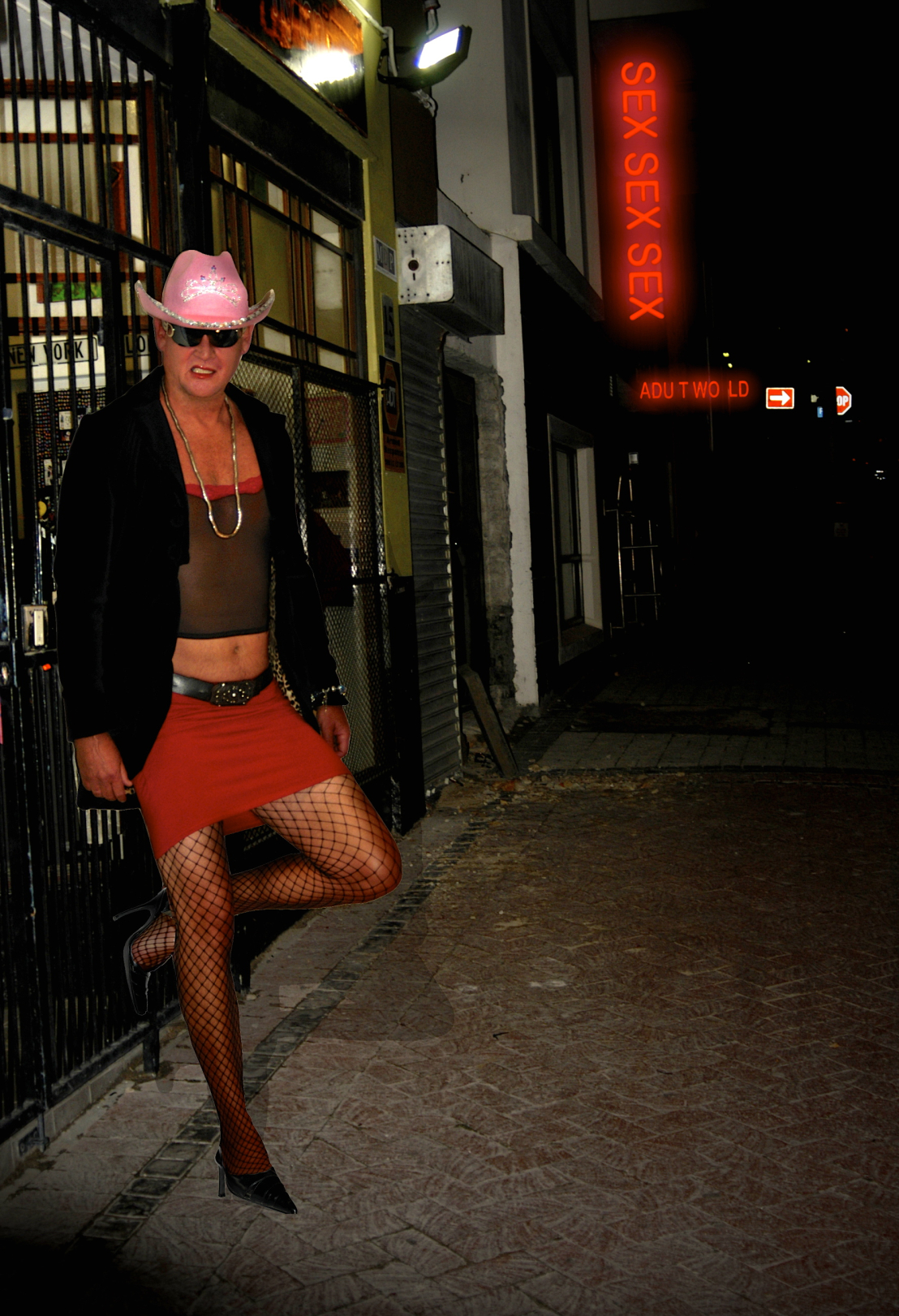 So I called old friend Ted, who I hadn’t seen since I was let go from my previous job, and said we ought to celebrate our inner women by pretending to be them. He agreed that this was what women would want men to do on Women’s Day.

An hour later he came stomping up my driveway in a lime green chiffon cocktail dress and a pair of bloodstained army boots. I explained to him that our objective was to resemble real women and not a pair of murderous transvestites.

I picked out one of the ex-wife’s evening gowns. The bottom part swirled agreeably around my ankles but the top half clung to me like a Jehovah’s Witness. We needed a boost in the boob department or our cover would be blown. I went to get something to drink, leaving Ted browsing through what used to be the bra drawer. Women always leave bras behind. It’s a way of marking their territory. At the end, though, they leave them as a way of reminding you of what you have lost.

Unlike the male organ, women’s breasts vary in size depending on their weight, marital status and mood. “Find me a 52B,” I shouted, mixing myself a suitably girly wine spritzer with a tequila gold on the side and two beers to chase.

While Ted was developing a cleavage, I perused the internet for Women’s Day specials. I was expecting to find sites with names like Gropeon offering lavender-scented pepper spray, well-hung Malawian houseboys and coffee table books featuring lipstick lesbians in a range of tastefully lit positions.

This is what women want on Women’s Day? I felt deflated. “Here,” said Ted, “stick these down your top.” Feeling considerably more inflated, I wiggled my fake bosom, drained my tequila and headed for the car.

Our first port of call was the beautician. Before going in, I fixed Ted’s wig and he fixed mine. He was a blonde, I was a redhead. Earlier, I had come across an entire drawer full of wigs. They were probably the scalps of former lovers.

Her name was Xandra, according to the name-tag on her blouse, if that’s what you call a garment so sheer you get vertigo when it comes near you. I pronounced it with a Xhosa click even though she was a very white girl. “Akshally, it’s Zandra,” she said, smiling for one-hundredth of a second.

“So you wanna wax?” she whined. “Yes please,” said Ted, “and a polish.” Ted gets his humour from Top Gear. That’s why he never gets laid. I nudged his leg to indicate that he should lower his voice by several hundred octaves. He thought I was initiating some sort of silly game that girls indulge in when they go to the beautician and I had to play along until the nudging and pinching and giggling turned into slapping and punching and swearing.

“So,” said Xandra. “Do youse want the bikini, the moustache, the landing strip, the American, the Brazilian or the Hollywood?” Ted said he wanted the Kentucky Fried Chicken but she had never heard of it so I said we’d just get our nails done instead.

She looked at my hands and shuddered. “You bite your nails?” Of course I bite my nails. How else do men keep their nails short? She said there was nothing she could do for them. The look on her face suggested there had been a death in the family.

Ted said he’d heard there was some kind of acid they offered clients. Xandra perked up and began telling him about the acid options that would rid his feet of ugly callouses. He told her he was more interested in the acid options that would rid his mind of ugly reality. She pretended to laugh and offered us a seaweed wrap which made us think of sushi so we excused ourselves and sashayed off down the road to a nearby restaurant.

Sitting on the veranda guzzling aperitifs – if double brandies and Coke qualify as aperitifs – it soon became apparent that gentlemen of no discernible breeding were giving us the venereal eye and making remarks that fluctuated between the utterly misogynistic and the abysmally moronic.

Ted began acting like a total slut. He batted his ridiculous little man eyelashes, flashed a slab of hairy thigh and did something revolting with his tongue.

“WTF?” I said to him. While continuing to flirt with what looked like a meeting of the Boeremag’s dog squad, Ted explained that he was paying the ultimate homage to women on Women’s Day. Women, he said, wielded the most incredible power. He said he could feel it pumping through his veins like molten lava. I reminded him that he wasn’t a woman and that it was most likely the Klipdrift in his veins, but he was having none of it.

He stood up, flicked his wig, fluffed his dress, puckered his scrawny lips and said: “Fuck you all, you bunch of ignorant cock-sucking losers.” Then he took my hand and we flounced right out of there.

It felt so liberating to treat men like the filth they are, without any risk of getting my head kicked in, that I may well have a sex change.

2 thoughts on “Trannies without fannies”