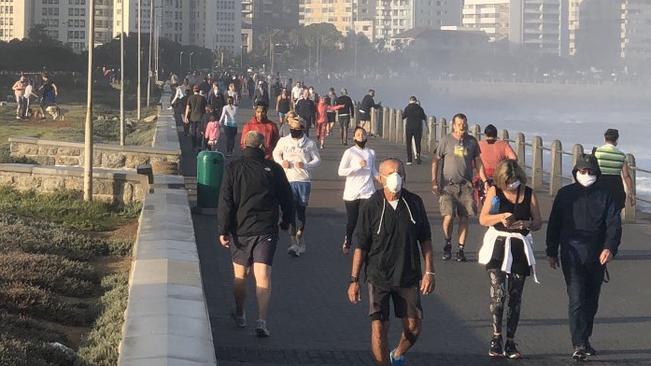 I hear lots of crazy stuff all day long and it’s not always just in my head either. For instance, I heard that the reason the government is keeping its Covid-19 modelling data from the public is because it wants to avoid sowing panic.

Fair enough. Nothing frightens South Africans more than hearing the truth. We have grown accustomed to being lied to – from the National Party warning us about the communists to the ANC claiming they are anti-corruption. We’re comfortable with deceit, dishonesty and distortion.

But the truth? We can’t handle the truth. The government is right. In this country, the truth won’t set us free. It will only make us panic. At the same time, we are South Africans. We live in a permanent state of low-grade panic.

Maybe the real truth is that it’s the government panicking because there is no data modelling going on at all. Maybe the Command Council is just a bunch of people behind closed doors eating snacks, yawning and staring out of the window. Occasionally someone sits up, shouts a random number and reaches for another vol-au-vent before slumping back into his chair, while the others chew vacuously and flick through their phones.

A lot of people seem to be worrying about their health these days, or whatever they are. Are we still calling them days? Two aeons ago, these same people would circle a mall’s parking lot for an hour looking for a spot near the entrance just to avoid walking an extra fifty metres.

Now they are setting their alarm clocks for 5.30am. Even though our state-sanctioned exercise period only starts at 6am, they are terrified of missing a minute of it. They use the 30-minute build-up to do stretching exercises and colour-code their masks and outfits while the father feeds the brats. It is the women who have claimed the exercise time as their own. The men can tag along if they wish, and the kids if they have to, but the hours of 6am to 9am belong to the women. That’s okay. Rather have them pounding the pavement than their loved ones.

I don’t have an alarm clock. They are bad for one’s health. Worse than heroin. The sound scares the bejesus out of the central nervous system and sends adrenalin coursing through the body, putting it into a full-blown fight or flight frenzy. I can’t use alarm clocks because it triggers a fight and flight response in my body. As a child, I would regularly destroy my bedroom while simultaneously fighting and fleeing the invisible furies. Eventually my mother realised it was better for all concerned if I woke up naturally, even if it meant being late for school. I once slept through an entire grade.

My pathological aversion to bells or sirens shattering my sleep means that I frequently miss our morning freedom altogether. Some days I wake up to find that I have only five minutes in which to cram three hours of exercise. Often there is no time to even put clothes on. I burst from my front gate, willy a-flap in the breeze, and run at top speed for two and a half minutes in any direction, then turn around and run home at an even more top speed because the police are chasing me. I don’t think it’s doing me much good. When I get home I have to drink rum and coke to slow my heart down. Sometimes I get the dosage wrong and it slows down too much and then I lie on the floor for the rest of the day waiting to die.

One thing is certain. The huddled masses are growing restless. Look at the state we’re in, we cry. Open the hairdressers! Let the beauticians operate! Even Trevor Manuel is saying the lockdown is turning into a bad idea, and this is a man who fought his way out of the Cape Flats with nothing more than an Okapi knife and a head for figures.

Some unions are saying that nobody should return to work unless it’s completely safe. That makes no sense. Work has always been the least safe place on earth. You can get trapped in the elevator, poisoned by cafeteria food, accused of arson and attempted frottage, hauled before a disciplinary committee and run out of town. I’m not saying this happened to me. Well, not all in one job, anyway.

A lot of people are also going a bit mental with this incarceration lark. Sure, most of them were probably mental to start with. But there’s nothing like being forced to stay indoors with people you increasingly want to murder to push you over the edge. It’s probably good for some marriages, though. There can’t be too many people still shouting, “Where have you been?” at their partners.

Living alone definitely has its pros and cons. As does living in general, I suppose.

Here’s an interesting thing to think about. In a 2014 study, participants were given a choice between sitting in silence with their own thoughts for fifteen minutes or giving themselves electric shocks. Most chose to shock themselves. It should be said that the study was conducted in Charlottesville, Virginia, home to neo-Nazis, white supremacists and, in the words of Donald Trump, other “very fine people”.

Trump is not the kind of man who could be left alone with his thoughts for very long, but only because he doesn’t have any. Well, not the kind that you or I might consider to be thoughts. I imagine if you could tap into what passes for his brain, you’d hear a rush of static. Or something like the sound of a burger and onions being fried in hot oil.

Anyway. Here I am, adjusting my heart rate with various medications, and it occurs to me that writing and prostitution are quite possibly the only two ways of making money while lying in bed. If you know of any others, do let me know.

32 thoughts on “Truth, lies and exercise”