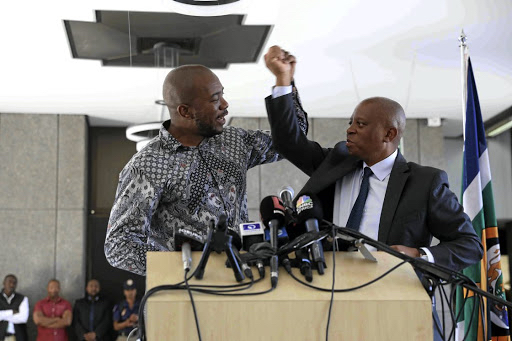 So Mmusi Maimane has, with rat-like cunning, jumped ship and left his party floundering like a stranded snoek. We knew this was coming the moment he held Herman Mashaba’s hand aloft and declared the former Joburg mayor a hero for stabbing the Democratic Alliance in the ribs.

I was going to write a fresh column but I am currently having a little trouble giving a fuck.

Here’s something I wrote to the pastor eighteen months ago.

Dear Mmusi Maimane, Bleeder of the Opposition.
Congratulations on finally getting rid of your mayor in Cape Town. Patricia de Lille is extremely dangerous and I’m not saying that just because she is a woman. She was born in Beaufort West, for heaven’s sake. It was only a matter of time before she started selling crack and bludgeoning councillors with her mayoral chain.

You’ve had a rough time of it lately. There will always be barbarians banging at your gate, but more worrying is the enemy that lurks within. The old Democratic Party should never have allowed the New National Party to wheel its Trojan horse into what is now your house. Not your fault. You were fresh out of school at the time. Sometimes I forget how young you are.

You addressed a rally on Freedom Day and made the rookie mistake of suggesting that white privilege was getting in the way of ending black poverty and needed to be addressed. This might have gone down with the great unwashed, but not so much with some of the senior members of your party. By senior I obviously mean white.

Your remarks struck a jarring chord with your silver-tongued shadow minister of public enterprises, Natasha Mazzone, who held up her father as an example of why not all whites were privileged. You’ll be familiar with her tweet but here it is again, just to give you one more sleepless night. “My father arrived from Naples in Italy, he was dark, and could not speak English or Afrikaans, but he was a great chef. He built himself up from nothing to make a good life for his family.”

She has a point. I remember seeing the signs along Durban’s beachfront in the 1980s, “Whites Only – No Blacks or Italians”. It was a struggle for those Napoleons, or whatever the hell people from Naples are called. A new kid appeared in my grade eight class after the second term and didn’t seem to speak any language at all. I liked him. A couple of days later the history teacher threatened to kill him if he didn’t provide his name. It was Giovanni Aquavelva or something. The teacher excused himself and ten minutes later the alarm went off and everyone ran outside into what appeared to be some sort of police ambush. The last I saw of Giovanni he was being carried off in the jaws of an Alsatian dog. He’s probably still trying to get his matric at a school in KwaMashu.

Not being able to speak English or Afrikaans clearly counted in the Mazzone patriarch’s favour. Whoever hired him and helped him on his way to becoming a great chef must’ve mistaken him for a well-tanned mute from Margate. If word had got out that he was Italian, he would have been lucky to find work at the Soshanguve Wimpy.

There seems to be a pattern here, comrade. May I call you comrade? I know the honorific is generally reserved for active members of the league of revolutionaries, but as a white man I find it prudent to call all black people ‘comrade’. Unlike AfriForum, some of us think it a bad idea to continue hammering nails into our own coffin.

But getting back to the pattern. Most of your problems seem to be caused by women. Who among us can forget Lindiwe whats-her-name who claimed to have been human trafficked into the DA and was eventually granted asylum by Harvard University?

You also tried to muzzle your predecessor, Helen Zille, who seems to have developed either a drinking problem or a thinking problem. She does have her moments of lucidity, but then gets onto Twitter and all hell breaks loose.

Then you had Dianne Kohler Barnard sharing a Facebook post by a flaming cockwomble who suggested that life in South Africa was better under the Fuhrer PW Botha.

And Phumzile van Damme resigned as the DA’s spokesperson earlier this year to spend more time “studying” and starting a “family”, which is political code for “I can’t be around these people any more”.

So, in the end, it was De Lille’s radio interview with Eusebius whats-his-face that enabled you to sever all ties with her. “I will walk away from the DA once I have cleared my name,” she said, recklessly violating section 3.5.1.2 of the party’s code of conduct.
Big mistake. Firing her on those grounds, that is. What you should have done is gone around to her house with a baseball bat and made it clear that even if she did succeed in clearing her name, she wouldn’t be walking anywhere anytime soon. You want to leave the DA? Fine. But you’re gonna have to crawl on broken legs, baby. Get Mazzone’s people to do it. They know. Then again, Mazzone and almost everyone in your party has a lot to learn about omerta. If there’s one thing the DA could benefit from, it’s the Mafia’s code of silence. Do your people ever shut up?

Because nobody really knew why you wanted De Lille out so badly, the charge sheet was released this week. It seemed a bit limp, to be honest. I’ve been accused of way more serious stuff over the years and have never been asked to leave anything apart from a couple of pubs and one or two marriages.

People say the DA is misreading the mood of the voters. They are only half right because fifty percent of your voters are preoccupied with menstruating and menopausing and you’d be a fool to guess what kind of mood they might be in. As for the men, well, it’s hard to say. When South African men get in a mood, they don’t necessarily blame their political party and change sides. They might murder their wives and girlfriends or drag the family off to Perth, but it would take more than a palace coup in the mayoral chambers to get them to vote for the ANC.

Besides, a thundering tsunami of fresh crises and scandals will crash down on us between now and the next elections. The dogs will keep barking for as long as the caravans keep coming and going. It’s when the dogs fall silent that we need to start worrying.
Speaking of baying hounds, I see the media has begun turning on you almost en masse. I can’t understand it. You were their darling for years. It’s becoming increasingly clear that you need a big move, and the sooner the better.

I suggest you declare the DA a guerrilla movement and start wearing camouflaged battledress. Get yourself a pair of aviator sunglasses and a beret. No, not a beret. A top hat. Instead of going to the bush, you hole up in the coffee shops. There’s a fabulous steampunk outfit in central Cape Town called Truth. The baristas look like insouciant rebels who travel through time and, best of all, they’re black. It’s perfect for your headquarters. You could be the Jonas Savimbi of our time, but better dressed, more eloquent, clean-shaven, slimmer around the hips and, when things get tough, you reach not for an AK-47, but for a mug of gourmet home-roasted coffee. In no time at all, you’d win back the white voters you’ve lost in the past few weeks.

By the way, condolences on what President Ramaphosa did to you in parliament the other day. “We will be the first to defend Mmusi Maimane against those in his own party who deny racial inequality,” said the wily coyote. It was like handing a thirsty man a poisoned chalice. Ancient tactic, divide and conquer. Instead of simply sitting there looking forlorn, you should’ve leapt to your feet and told him in no uncertain terms where he could stick his Machiavellian strategies.

On the other hand, we all welcome a kind word when days are dark and friends are few.

4 thoughts on “Officially opposed to the official opposition”