Dear Comrade Julius Malema the First, Commander-in-Chief of the Economic Freedom Fighters, Hero of the Poor, Prince of Pedis, the People’s Parliamentarian, Evader of Taxes and Creator of the Revolutionary Onesie.

Congratulations on getting your BA degree through Unisa. That’s quite an achievement, especially when you consider how difficult it is just to get through to them on the phone.

I see you’ve been very busy lately putting your qualifications into practice and exercising your superior intellect. For a start, you reminded the people of Soweto about their role in the struggle against apartheid. Well done. People have short attention spans these days and all too often we forget hair appointments, wedding anniversaries and crimes against humanity.

The real masterstroke, though, was when you reminded the crowd to continue reproducing. I often forget to reproduce, with the result that I have only one loinfruit. Pathetic, I know. But this is good for black people because, as you so accurately pointed out, “White people do not want us to give birth because they know we are more than them … The day they are more than us, they will take over our land.”

It’s a fascinating theory, right up there with Frantz Fanon’s theory of colonial identity and the parallels between racial and commodity-based fetishism. And, obviously, the theory that Tinky Winky is gay.

However, no matter how brilliant theories are, it is important that they be tested. Without testing we could all just go around saying things like, “The moon landing was fake.” And, “9/11 was an inside job.” Which it quite clearly was. I don’t believe the moon landing was faked, though, because there is no such thing as ‘the moon’. I know a hologram when I see one and this is up there with the best.

Anyway, I tested your theory that white people wanted to take over politically by out-breeding black people. My maths is about as good as your woodwork, so my figures might not be one hundred and ten percent accurate. There are 55 million people in this country, most of whom can be found in my local bottle store on a Friday afternoon. Of that, 44 million are black and 4.5 million white. Hang on. What’s this? There are 4.8 million coloureds? Are you aware of this? What if you’re wrong and it’s the coloureds, not the whites, who are out to win this breeding war? If that is the case, we’re in deep trouble, my brother, and blacks and whites need to stand together against the Bruin Gevaar.

But I assume you’re right because you have been right about everything so far … well, everything apart from your blind loyalty to President Zuma, which only ended when he pulled a Dr Frankenstein four years ago and inadvertently turned you into his monster. I use the word ‘his’ loosely.

So here are my calculations. For the white population to go top of the log, every last Caucasian would have to have ten babies. That includes pensioners, children and, indeed, babies themselves. That’s right, comrade. The babies would have to have babies. But that’s not all. The men as well as the women would need to breed, which is entirely possible because it’s a well-known fact that white men have ovaries tucked behind their livers.

Oh, no. My test just got a whole lot more complicated. Figures show that last year the black population grew by 7.3% while the white population declined by 4.2%. This means that … I don’t know what it means. This is one of those rare moments in my life where beer can’t help.

So, unless Statistics SA is part of the white supremacist conspiracy, I think it’s fairly safe to say that white South Africans are still breeding – they’re just doing it in Perth, London and Auckland.

I must say, though, that you are a bit of a natural contraception. I was lying in bed with a girlfriend watching you being all red and shouty in parliament and she got so depressed that she lost all interest in sex. Maybe it’s a white thing.

You also told the people of Soweto – a vast, sparsely populated area where you can sometimes travel for up to three or four metres without bumping into another living soul – that “to make children is a revolutionary duty‚ because children represent reproduction of society. And when you reproduce yourself you reproduce your ideas and legacy.”

Correct me if I’m wrong, but as far as I know, you have spawned only one sproglodyte while your archenemy Jacob Zuma has 22 at last count. Soon we will find out who is the real revolutionary.

Inexplicably, not everyone recognises your genius. Jabu Mahlangu, spokesman for the SA National Civic Organisation, described your call to coitus as “illogical gibberish”. Well, that’s one less person you have to name a street after once you’re president.

Anyway, good luck with the launch of your manifesto next weekend. Did you know it comes from the Greek word ‘mani’ meaning ‘barefaced’ and ‘festo’ meaning ‘lies’? Of course you did.

Also, all the best for the municipal elections. When you win a municipality you absolutely must ride into town on a tank. It worked for the Americans when they liberated Paris and it can work for you when you liberate Parys. I’m happy to come in with my flamethrower and flush out the last of the ANC councillors.

By the way, I like your logo – a giant black fist dominating Africa and threatening South America with an assegai. Good for you. Those goddamn uppity Latinos need to learn that they aren’t the only ones who can cripple economies through poorly thought out socialist policies. 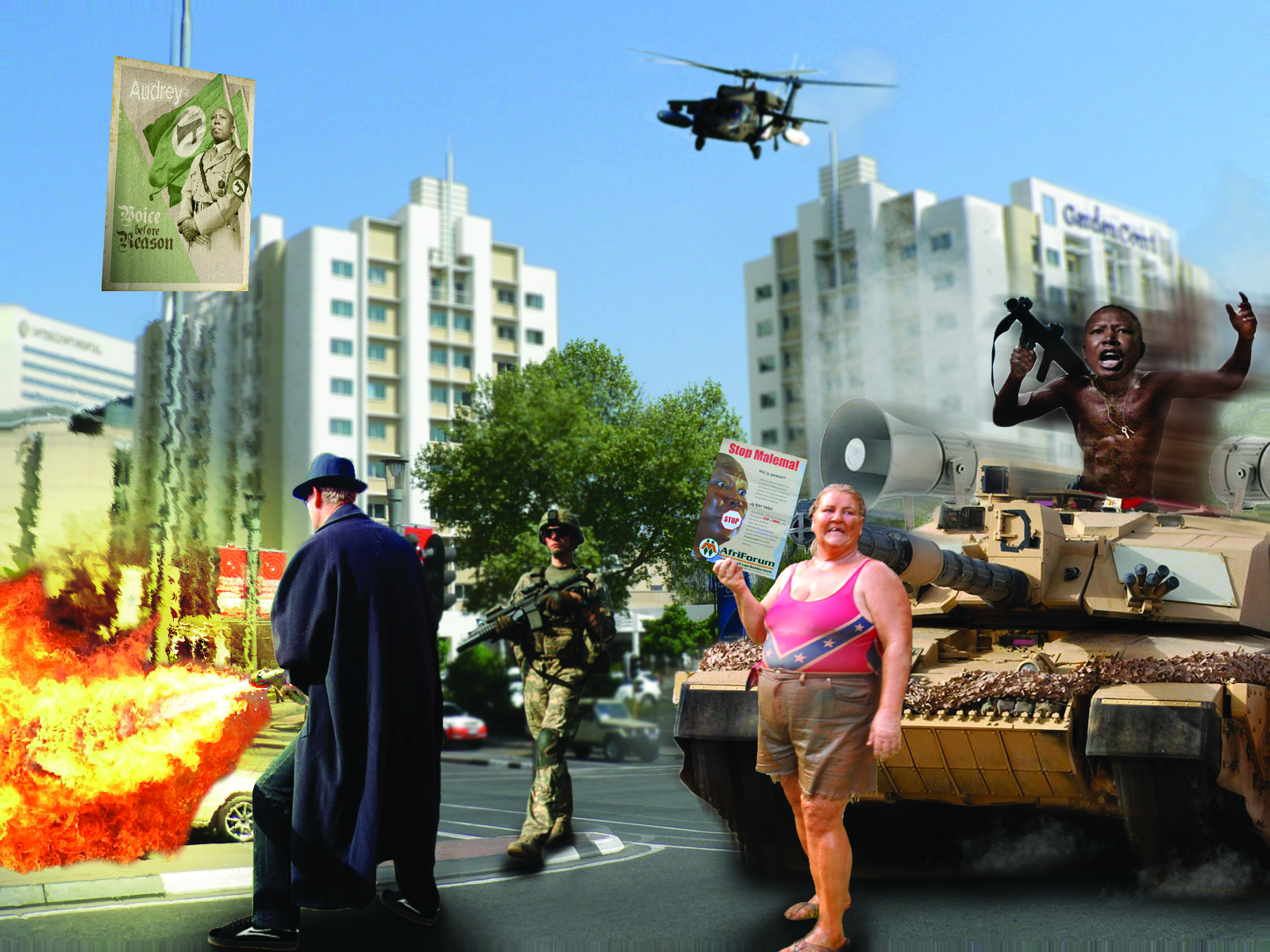 22 thoughts on “An open letter to Julius “Seizure” Malema”