There is so much to write about this week. The crisis at the country’s universities. Oscar Pistorius’ release into controlled captivity. Britain’s unseemly fawning over the president of one of the world’s most repressive and undemocratic regimes – no, not Syria. China. So I thought I’d write about beer instead.

The poetically named Anheuser-Busch InBev has put in a cheeky offer to buy SABMiller for $104-billion. Big deal. That’s my monthly tab at the pub.

I’m not usually a fan of megalithic corporate conglomerates, but this one will be able to penetrate deep into Africa, Asia and Latin America. If there’s one thing the poor need, it’s greater access to fresh beer.

Unlike some people I could mention, beer has always been there for me. That’s not strictly true. It hasn’t been as loyal to me as I have been to it. I have spent many nights in its company, only to wake up the next morning to find that it has stabbed me in the brain and made off with my cellphone.

I am not alone in this. Many of my compatriots are in a committed relationship with beer and yet South Africa is not even in the top 24 countries that love beer the most. This is pathetic and I, for one, am deeply ashamed. I know I’m doing my bit. It’s you people out there – drinking wine and other rubbish – that are letting us down.

At the bottom of the list, 67% of Ecuadoreans drink beer. We can’t even beat that. Fiji, for heaven’s sake, drinks more beer than we do. Namibia at least does the continent proud, coming in third with an unhealthy 96.7%. Bhutan, of all places, takes top honours. There, the entire population drinks beer. They score a perfect 100%. Those Buddhists sure could teach us a thing or two about commitment.

Anyway. At least it’s still October, a month in which beer is worshipped around the world. Not so much in Saudi Arabia. The northern hemisphere traditionally pays tribute to beer at the height of the fall. The height of the fall often depends on where you are and how much beer you’ve had. America named this season after the Pilgrims developed a taste for Wampanoag homebrew and spent seven months struggling to get to their feet. We call it autumn although we also fall a fair bit. It’s very confusing.

Many countries have followed Germany’s example and celebrate their own version of the Oktoberfest. According to my research, “the southern Mexico City borough of Xochimilco hosts an annual traditional German knees-up complete with beer and bratwurst, all served up with a fiery Mexican twist”. The twist presumably comes when the Los Zetas cartel crashes the party and kills everyone.

Durban doesn’t have an Oktoberfest because it’s held in September so they have to call it the Bierfest. It’s quite understandable. It’s hot, the venue is available and the beer is on ice. What the hell difference does it make what month it is? We’re going to be drinking beer solidly every day until the end of the year anyway.

The first mistake the organisers of the Bierfest made was to introduce a European element to the festivities, offering oompah bands, ‘Bavarian’ barmaids with their chests hanging out, weird German sausages and so on. Their second mistake was not to invite me.

With October running out of days, I was becoming anxious about missing the few remaining opportunities to celebrate the month of beer. Of course I had been celebrating all along, but slumped on the couch throwing peanuts at the monkeys and talking to a dog I don’t have isn’t much fun. I wanted to be among fellow aficionados, or, as my mother used to call them, drunks.

After going for a surf at Umdloti the other day, I was standing under the shower when this guy joined me. It’s not what it sounds like. For a start, he had his own shower. And he didn’t just come out of the bushes, either. He had also been surfing. Surfers in Durban don’t generally talk to each other unless they’re related or have known each other for at least twenty years.

This dude broke with tradition and said he’d seen me around. Asked who I was. I gave him a fake name because I don’t trust anyone, least of all myself. Next thing you know, I’ve been kidnapped and sold off to a gang of degenerate white slave traders operating out of the Bush Tavern. It can happen.

A few days later I saw his picture in the paper. He wasn’t involved in human trafficking at all. What he had done, though, was start his own brewery. I cursed myself for being such a fool. It was as if I had allowed a soul mate to slip through my fingers. The company is called Poison City Brewing. My column is called Durban Poison. The logo is five surfboards positioned to resemble the leaf of one of Durban’s most popular herbaceous plants – the Cannabis sativa. I have five surfboards and … well, I needed no further proof that the invisible hand of Jah was trying to bring this brewery and me together.

Using my finely honed investigative skills, I tracked him down and insisted that he introduce me to his beer. It’s a lager called The Bird. I hoped he would leave us alone for a while so that we might become better acquainted. Instead, he invited me to a mini Oktoberfest at his home. After making sure that nobody would be wearing lederhosen and I wouldn’t be expected to do the ridiculous Chicken Dance, I agreed to attend. He said that, as a nod to tradition, his German wife would be there. Blonde? Yes. Okay, then. Dark-haired German women terrify me. It doesn’t feel right. Like tall clowns. Or talking sheep.

It turned out to be way better than a normal beerfest because the beer was free. Obviously it had to be an invitation-only affair. Open something like that up to the public and you’d have to get the riot police in. Especially on the north coast.

Being a Sunday I was dressed casually – much like a homeless person dresses casually – and was relieved to find myself in good company. This wasn’t the kind of crowd one might expect at, say, a wine-tasting soiree. I suppose a beer made by a company called Poison Brewing, with a logo that might get you searched at a roadblock, was never going to attract a conventional crowd. I might have been the only person there without a tattoo. Or, oddly, a young child.

And that’s the point, really. Anti-establishmentarianism might be damnably hard to say when you’re off your face, but with a bit of effort it can become the new zeitgeist.

If this Anheuser-Busch-SABMiller merger goes ahead, they will control a third of all global beer sales and rake in $64-billion a year. And they’ll pay tax in Belgium. I’m done with making rich people richer. Anheuser-Busch chairman Olivier Goudet and his accomplices have quite enough money.

If craft beer is the Che Guevara of the brewing industry, carry me to the barricades. 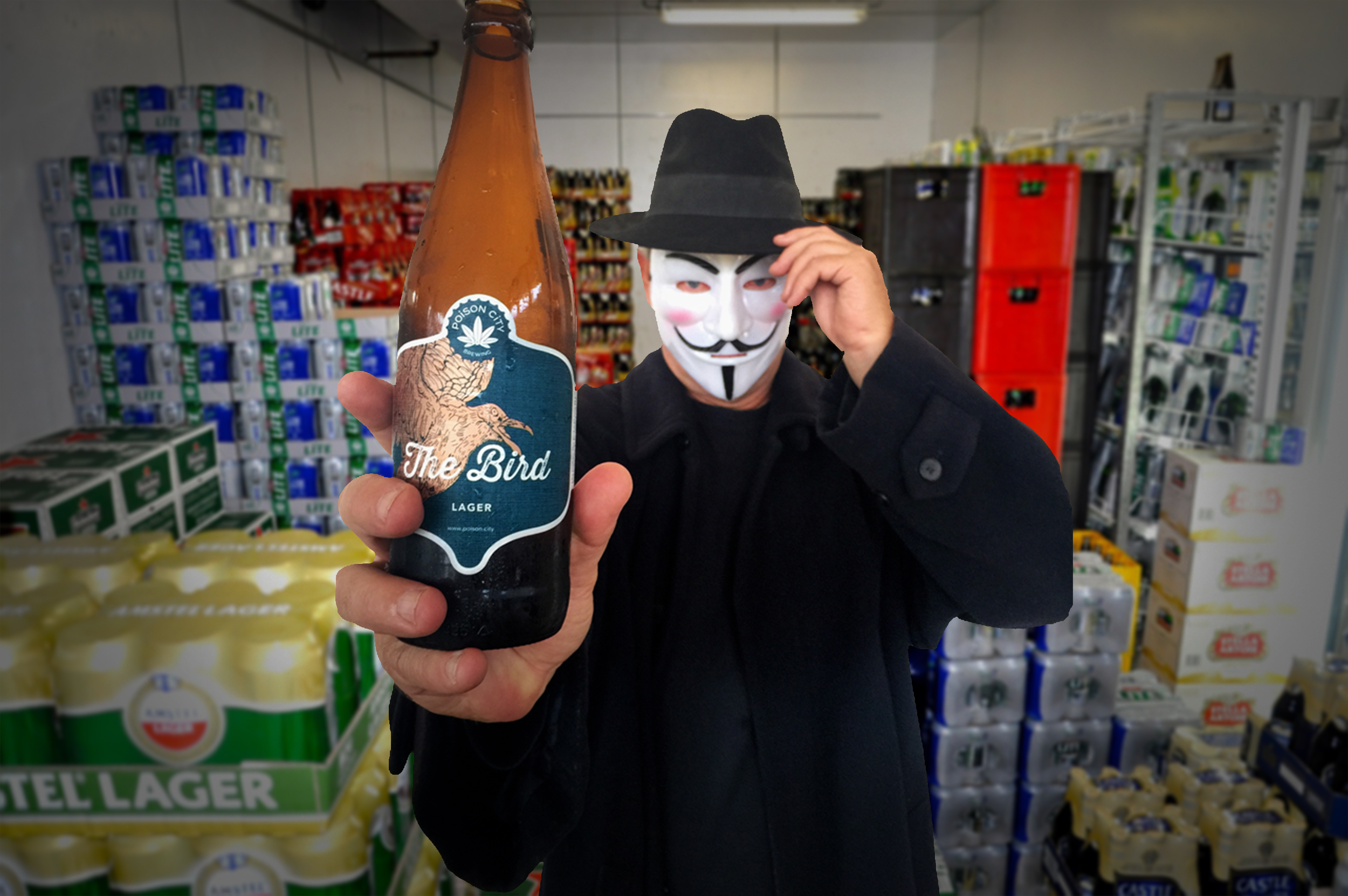 SUCK ON  THIS: Ben Trovato has found a crafty way to deal with giant brewing monopolies – show them The Bird.

2 thoughts on “Crafting a new revolution”